If you don’t follow the work of MIT’s Senseable City Lab, I highly recommend that you start.

Earlier this year, researchers from the Massachusetts Institute of Technology, the Swiss Institute of Technology, and the Italian National Research Council developed something that they call “slot-based intersections.” In a world where cars have sensors and drive themselves, it is intended as a more efficient alternative to traditional intersections. Goodbye traffic lights.

Much like air-traffic control, the way the system works is by assigning individualized time slots to each car for when they may enter an intersection. For example, in the diagram below (Sequence 01) the car approaching from the bottom left (#10) has a “stop distance slot” in front of it reserved for 3 of the cars that are currently in the intersection. The two that are traveling perpendicular to it and the car currently turning left into the same lane as #10 (on the other side of the intersection). The car in the midst of turning right (#5) is exempt because there’s no possibility of collision. 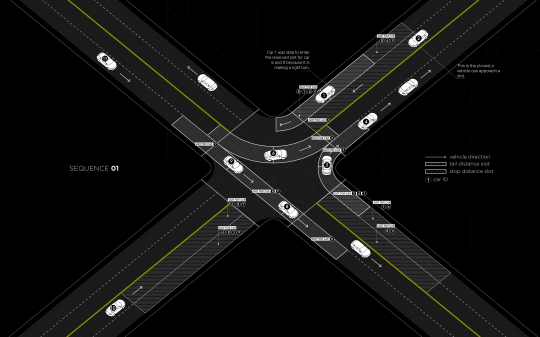 In Sequence 02 (below) you can see that car #10 is now turning left, which means it has its own time slot in the intersection. Other approaching cars now have a “stop distance slot” dependent on car #10. 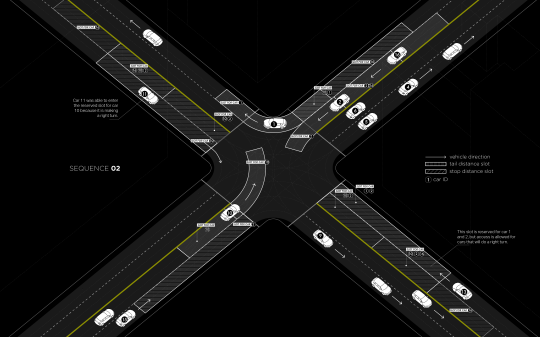 In all cases, cars making a right turn are able to move freely, provided they will not interfere with any other cars. 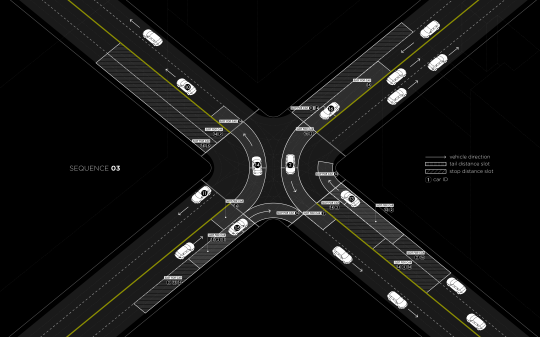 The researchers estimate that real-time slot allocation might double the number of vehicles that a traditional traffic-light intersection can handle today and, in some cases, it might completely eliminate stop and go traffic.

Often when I write about self-driving vehicles I hear people tell me that cars are still cars. It doesn’t matter whether they are self-driving or not. The same inefficiencies apply. They are not the solution to urban gridlock. Elon Musk was also criticized (following his Master Plan) for not properly understanding urban geography.

But self-driving cars will create new efficiencies. I am not saying that they are a silver bullet, but I am saying that they will help a great deal. I don’t think that anyone truly understands the extent of these efficiencies, but there are a myriad of possibilities. This Senseable City Lab project is a perfect example.

What I am grappling with right now is the relationship between self-driving vehicles and traditional forms of public transit. Until we get a handle on the efficiencies and overall impact, it’s hard to ascertain how these different forms of mobility will work together. My gut tells me that the lines are bound to get blurry and that self-driving “cars” will feel less and less like the cars we know today.

Below is a video that was published along with the research. If you can’t see it, click here.