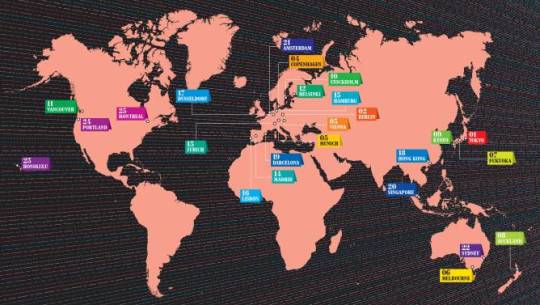 Monocle’s annual survey of the top 25 most liveable cities in the world was just released. It’s now in its 10th year. I found it in my inbox this morning and it was a good reminder that it was about time I renewed my subscription. I’ve been a regular reader of Monocle since 2007, but I let my membership lapse last year.

Of course, any sort of list like this is going to be subjective. It all depends on the methodology you use. Still, their annual survey is an interesting way to see what each city is up to and where the tides are going. This year Monocle put extra weighting on each city’s nightlife. If you’re not a subscriber, here’s a short video you can watch. It will give you a rundown of all the cities. (I was happy to see Montréal creep onto the list. Incredible city.)

This focus on the night is something that I’ve been writing about a lot both on this blog and elsewhere. It’s an idea that’s picking up momentum around the world as an economic development strategy. But for whatever reason, uptake seems to be slower here in North America.

I like how architect Anna Dietzsch puts it in this video. She says that Rio may have the beaches, but Sao Paulo (where she’s based) has the night. That’s exactly how cities should be thinking about this opportunity. It used to be that cities thrived almost entirely because of location, waterways, transport, and other natural features (example: Buffalo). But increasingly, it’s becoming about things like nightlife.

Vancouver may have the mountains, but Toronto has…