Roman Mars of 99% Invisible recently published an excellent episode called The Mind of an Architect. It has to do with a set of research studies completed in the late 1950s by an organization at the University of California, Berkeley known as the Institute of Personality Assessment and Research (IPAR).

IPAR was founded by a personality psychologist named Donald MacKinnon. He initially worked for the precursor to the CIA and founded IPAR with the intent of studying “combat readiness and efficiency.” But over fears of how creative the Soviets were getting, the focus of IPAR shifted to instead studying creativity.

And architects were deemed to be an ideal test subject (from 99percentinvisible.org):

“Researchers saw architects as people working at a crossroads of creative disciplines, a combination of analytic and artistic creativity. As professionals, architects had to be savvy as engineers and businessmen; as aesthetes, they also acted as designers and artists.”

So over a series of weekends in the late 1950s, some of the most celebrated minds in architecture – including people like Philip Johnson, Richard Neutra, and Louis Kahn – were studied and picked apart. 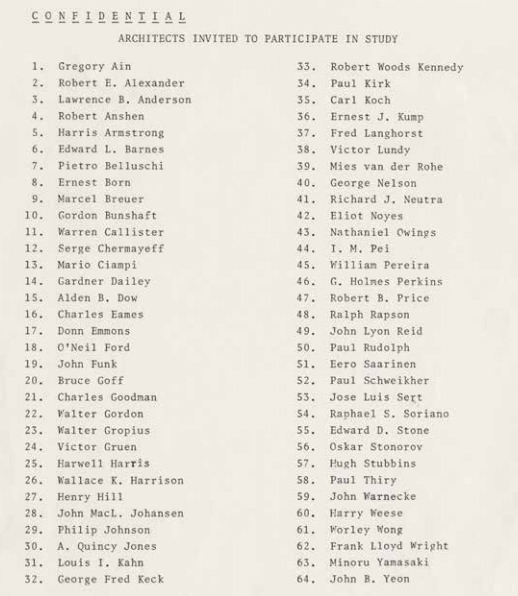 They were asked to do quick sketches, create mosaics, and they were asked questions such as this one: “For the next 45 minutes we would like you to discuss this notion: if man had developed a third arm, where might this arm be best attached?”

In the end, here’s what they concluded:

The researchers began to notice certain patterns across creatives of all professions and genders, including a tendency to nonconformity and high personal aspirations. They also found many creatives shared a preference for complexity and ambiguity over simplicity and order. Creatives could make unexpected connections and see patterns in daily life, even those lacking high intelligence or good grades.

In short: IPAR found that creative people tend to be nonconforming, interesting, interested, independent, courageous and self-centered, at least in general. Many of these traits may seem obvious today, but they were not necessarily obvious prior to these studies. Back when their tests were being conducted and findings presented in the 1950s and ’60s, the very idea of a “creative personality” was a novelty in academic and public discourse.

The findings may not be groundbreaking to us today, but the documents and recordings produced during the study are certainly interesting. If you’re into this topic, there’s also this book you can pick up.

Oh, and if we are to have a third arm, I would like mine to run almost parallel to my existing dominant arm (right). That way I could double up on my most potent dexterity. It would also be far less intrusive than an arm on one’s head or in the middle of one’s back. Then again, it would ruin our symmetry as humans. And perhaps that third arms need to be celebrated instead of being masked.

What would you suggest?

Image: Institute of Personality and Social Research, University of California, Berkeley / The Monacelli Press (via 99% Invisible)