Everyone, for good reason, seems to be fixated on both people returning to cities (like those narcissistic Millennials) and people urbanizing for the very first time. This latter scenario is happening rapidly across the developing world and in many cases – but not all cases – it is helping to lift people out of extreme poverty.

But by most measures, urban areas represent only about 2-3% of the world’s land area, despite housing over 50% of our population. So here’s an interesting thought for this morning: What is happening and what will happen with the remaining 97-98%?

In this recent talk by architect Rem Koolhaas, he attempts to dissect the future of living, loving, and working through the lens of architecture. However, he starts by saying that architecture is, in fact, too slow to properly capture the zeitgeist of any time period. It is, “an unbelievably slow art.” That said, Koolhaas has a remarkable ability to identify what is happening (see Delirious New York) and then call it out in a way that you probably haven’t thought about.

In the above talk, he hones in on the impact of Silicon Valley – certainly the spirit of our time – on the rural landscape outside of our cities. Interestingly enough, he also talks about how the tech industry has begun to borrow terminology from architecture in order to describe itself.

Screenshot from the video: 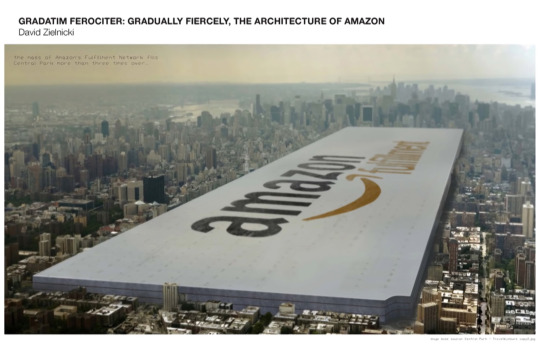 Despite their ethereal appearance, technology giants still have large physical footprints for servers, production, logistics, and so on. But there’s no reason – or way – to accommodate them inside of our cities and so they cluster outside, in the 97-98% areas. These are places like the Tahoe-Reno Industrial Center, which is the home of Tesla’s new Gigafactory.

Because of sheer scale and because there’s no need for them to possess much in the way of humanistic qualities, these are spaces which are void of architecture, urbanism, and, in some cases, a light spectrum beyond what is absolutely necessary for the specific function of the building (discussed in the video).

Of course, the periphery has long serviced the core. But Koolhaas’ thinking has, as it often does, made me consider this phenomenon in a slightly different way. He paints a picture of a spiky world where we are all crammed into sensor and app-driven cities (the front-end), all of which are then powered by big mechanistic boxes that many of us may be naive to (the back-end). In some ways it feels like the Matrix. What we see and experience could just be the tip of the iceberg.

Architecture may be unbearably slow, but as a society we have always built what matters to us most at the time. At one point it was places of worship. But today, at least for part of our landscape, it is boxes not intended for us to really experience. Maybe that’s not really architecture. Maybe it is simply the back-end for our cities.