The Detroit Free Press recently published a summary of some of the new rental apartments coming online in and around downtown Detroit. Here’s the map that they published along with their piece: 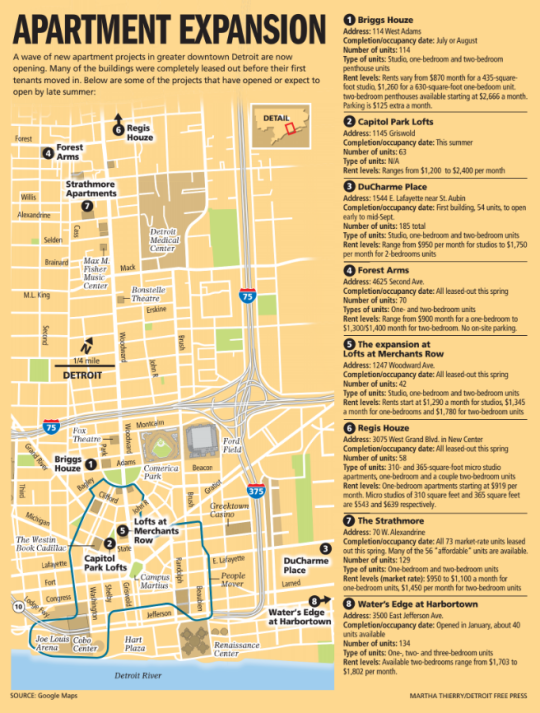 Based on this article, demand is outstripping new supply and rents are starting to push above $2 per square foot. This strikes me as a solid number given that there are also for sale lots/houses in the city going for $10,000.

Going back to some of the posts I have written about rental apartment development in Toronto, you might remember that $3 psf is roughly our magic number given current cost structures.

In some special circumstances you might be able to get a project off the ground with rents closer to $2 psf, but that’s an exception to the rule. There are many areas in the Toronto region with $2 psf rents and few, if any, new rental apartments.

But Detroit is obviously a different city, as is every real estate market.

Land would be cheaper. Many of these new rental apartments are conversions of existing buildings (which were probably bought for cents on the dollar). And I wouldn’t be surprised if there are tax abatements and other incentives to encourage more development.

I also wonder if people in the city aren’t being at least partially drawn to multi-family buildings because of the safety and security benefits. That’s something that certainly came up when I was in Detroit last weekend.

Regardless, this is a good news story for Detroit, which is not always the story you hear people telling of the city.