Blogger and programmer Eric Fischer has an excellent post up on his site where he looks at: “Employment, construction, and the cost of San Francisco apartments.” It’s worth a good solid read.

What he did was dig deep into whatever data he could find – the data goes back to the beginning of the 20th century in some cases – to try and figure out a solution to San Francisco’s housing affordability problem.

Many (including myself) have argued that, at least part of the solution, is to build more, not less, housing. However, others, such as Tim Redmond of 48 Hills, have argued that building more market-rate housing would simply exacerbate the current situation. 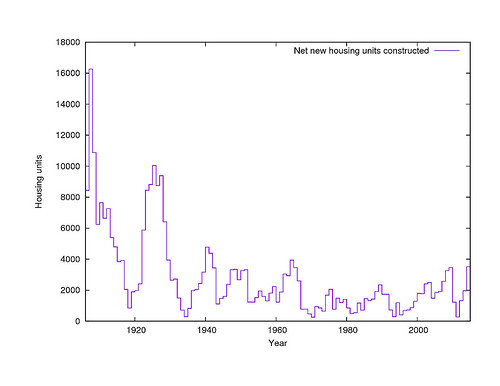 In Eric’s analysis, he looked at everything from median rents and new housing units constructed (above graph) to annual wage growth and income inequality. I particularly liked his summary of the city’s various building booms.

In the end, here’s the conclusion that he came to:

“In the long run, San Francisco’s CPI-adjusted average income is growing by 1.72% per year, and the number of employed people is growing by 0.326% per year, which together (if you believe the first model) will raise CPI-adjusted housing costs by 3.8% per year. Therefore, if price stability is the goal, the city and its citizens should try to increase the housing supply by an average of 1.5% per year (which is about 3.75 times the general rate since 1975, and with the current inventory would mean 5700 units per year). If visual stability is the goal instead, prices will probably continue to rise uncontrollably.”

By visual stability, he is referring to maintaining the current urban fabric of San Francisco just the way it is. In other words, he is making the link between preservation and affordability in a prosperous and growing city.

Intuitively, this makes sense to me. It’s unrealistic to think that you can maintaining some level of housing affordability without allowing supply to increase alongside demand.

At the same time, I do not believe that preservation needs to equate to no changes whatsoever. Urban preservation, to me, should be about dutifully respecting the past while still looking firmly towards the future. And that’s how I believe successful should be approaching this problem.