When it comes to a real estate market, there are always the typical metrics: sale prices, rents, vacancy and so on. But I’m always interested when somebody looks at the market in a different way and comes up with other kinds of metrics.

That’s why I was intrigued when I stumbled upon this post by Sam Floy, where he looks at the concentration of coffee shops and friend chicken shops across London in order to determine which neighborhoods are in fact “up and coming.”

To give you a taste, here’s his coffee shop map: 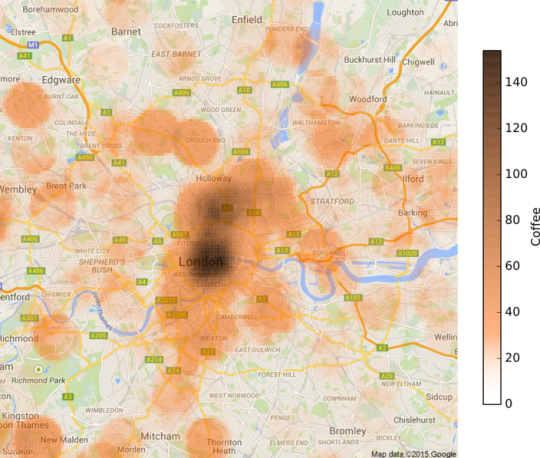 His thinking was that if a neighborhood had a high density of coffee shops, a low density of fried chicken shops, and relatively low house prices, then it could probably be thought of as up and coming.

Coffee shops are often considered to be leading indicators of urban change (i.e. gentrification), and, well, friend chicken places I guess speak to a different kind of neighborhood.

These sorts of playful studies aren’t going to tell you exactly which numbers you should be plugging into your development pro forma. But I think unconventional analyses can sometimes tell you a bit more of the story behind the numbers.