Hunter Oatman-Stanford just published a longish read over on Collectors Weekly that talks about the history of suburban office complexes in America. That part alone makes it an interesting read.

But he also makes the argument that innovative companies like Apple and Google are still stuck in a midcentury suburban mindset with their new mega headquarters:

“I look at Apple’s Norman Foster building, and it’s 1952 all over again,” Mozingo says. “There’s nothing innovative about it. It’s a classic corporate estate from the 1950s, with a big block of parking. Meanwhile, Google is building another version of the office park with a swoopy roof and cool details—but it does nothing innovative.”

Others have made this same argument. Back in 2013, Wired published an article talking about why Apple’s new Norman Foster spaceship could result in them losing the war for tech talent.

And if you read the piece in Collectors Weekly, you’ll see just how little, in some cases, the office environment has changed since the middle of the 20th century.

Back then, we also had big name starchitects designing suburban head offices for innovative companies. Below is a photo from the GM Technical Center in Warren, Michigan. It was designed by Eero Saarinen and it opened in 1956. 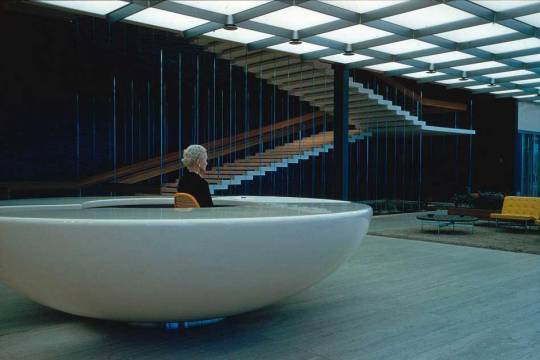 There’s lots of research that suggests that, today, both entrepreneurs and capital are flocking to urban centers, instead of the suburbs. And I certainly don’t need to repeat that to this audience.

But given this shift, I think we will increasingly view the suburban sprawl of places like Silicon Valley as a serious competitive disadvantage. I mean, I am sure these new buildings will be lovely, but I certainly wouldn’t want to work there.