We talk a lot about economic
inequality these days. We worry, among other things, that our successful cities
are becoming playgrounds for the rich and that housing is becoming increasingly
unaffordable for the middle class.

Without negating the
importance of things such as attainable housing, I’d like to offer up two,
potentially new, perspectives on economic inequality.

“If the rich people in a society got that way by taking wealth from the poor, then you have the degenerate case of economic inequality where the cause of poverty is the same as the cause of wealth. But instances of inequality don’t have to be instances of the degenerate case. If one woodworker makes 5 chairs and another makes none, the second woodworker will have less money, but not because anyone took anything from him.”

Of course, Paul Graham is thinking about this from the perspective of a venture capitalist that funds startups and helps entrepreneurs get rich. But what about the impacts to people who live in a city where the rich are far richer than the poor?

That brings me to the second perspective.

A recent study, published in The Journal of the American Medical Association and written about in the New York Times, has discovered a surprising relationship between income and life expectancy across the United States from 2001 to 2014.

What they found was that cities with high economic inequality – such as New York and San Francisco – actually have lower inequality when it comes to life expectancy.

Here is a chart from the New York Times: 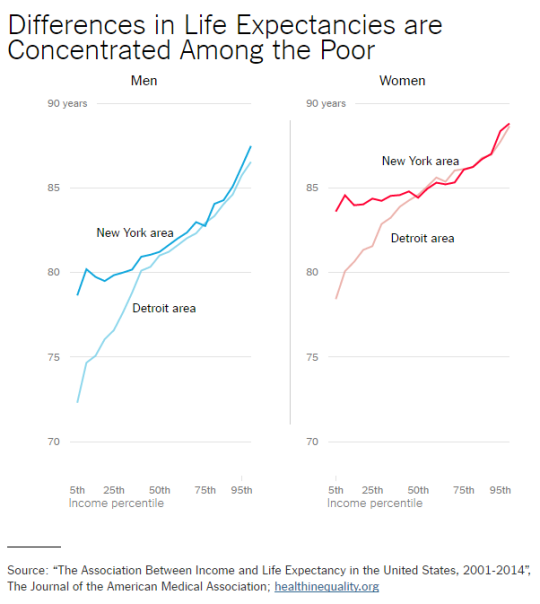 And here is a chart from healthinequality.org: 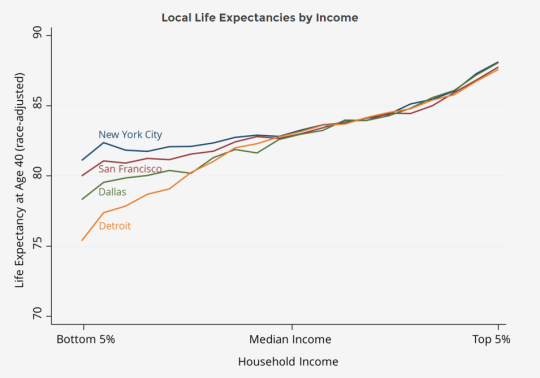 If you’re rich, it doesn’t matter where you live. The life expectancy of a rich person in New York is roughly the same as a rich person in Detroit. (Though, as to be expected, women generally live longer than men.)

However, as income levels fall, so does life expectancy. But it falls more in a city like Detroit than it does in New York. In fact, rich cities such as New York and San Francisco are almost model cities in this regard. Why is that?

The biggest predictor appears to be health behaviors, such as smoking and obesity:

“The research seems to suggest that living in proximity to the preferences — and tax base — of wealthy neighbors may help improve well-being. New York is not just a city of rich and poor, but also one of walkable sidewalks, a trans-fat ban and one of the most aggressive anti-tobacco agendas of any place in the United States.”

So there you have it. Two, potentially new, ways to think about economic inequality.