I’ve written a lot about mid-rise development on this blog and elsewhere.

I recently wrote this post responding to a tweet by the Chief Planner of Toronto. And towards the end of last year, I wrote a longer piece for developer Urban Capital’s annual magazine. If you missed it, you should definitely download a copy. Not so much for my article, but because, overall, the UC magazines are excellent. (Credit to David Wex.)

(I apologize in advance if this post gets a bit too geeky for some of you. It refers to a specific land use policy in Toronto, but it has much broader relevance.)

If you take a look at the final Avenue & Mid-Rise Buildings Study and turn to page 56, you’ll see that Performance Standard #5B (Rear Transition to Neighbourhoods: Shallow Properties) was stricken from the report. It was never adopted as a standard.

So what is this all about?

This performance standard had to do with something called “Enhancement Zones”, which was proposed as a way to deal with shallow parcels of land on Toronto’s main avenues. You see, because of the other performance standards – namely the angular plane (see images below) – the depth of an avenue site is hugely important for determining what can ultimately be built on it.

From the city’s perspective, this is a double edged sword. In the case of exceptionally deep lots, you can actually meet all of the performance standards while at the same time exceeding the recommended densities. But in the case of shallow lots, the performance standards sometimes/often make it so that you can’t even achieve the recommended densities. In fact, a lot of sites simply become un-developable.

To give you a visual for what I’m talking about, here’s a section drawing from a zoning by-law that was adopted by City Council for St. Clair Avenue West in midtown: 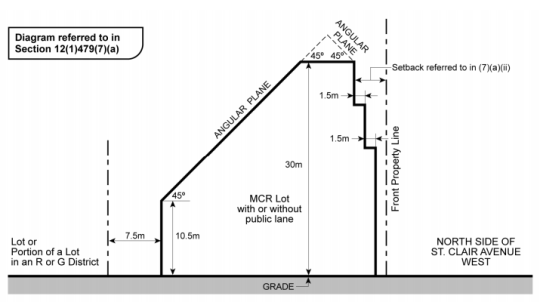 Here you can quickly see that if you were dealing with a shallow lot of, say, 25m in depth, you wouldn’t have much left over after taking into account the rear property line setback (7.5m above), the front property line setback, and the 45 degree angular plane. Now you’re beginning to see why I said that it is easier said than done to play creatively within the guidelines envelope (thick black line above). When you look at the feasibility of these projects, you quickly end up getting pushed right up against the glass.

But this is where Enhancement Zones comes in.

The idea here is that an adjacent low-rise residential property (or pair of properties in the case of attached houses) could be included in mid-rise development proposals to create a deeper site that then meets the requisite separation distances between the mid-rise scale and the low-rise scale. To be clear, nothing would be built in the Enhancement Zones. They would just help to relieve some of the setback pressures from the original shallow lot and maybe even create a rear laneway system where one did not exist before.

Below is a drawing from the Mid-Rise Buildings Study showing that new condition. The same 7.5m setback applies at the rear, but now it sits within an Enhancement Zone – formerly an adjacent and separate property. All the text is crossed out because, again, this standard was not adopted. 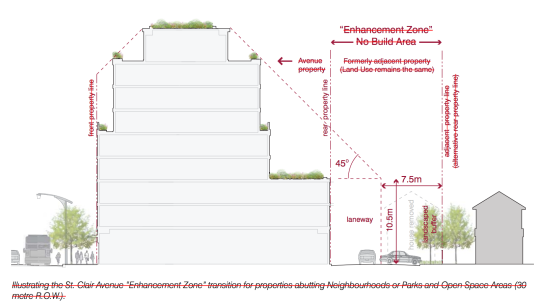 From a mid-rise development and feasibility standpoint, this makes a lot of sense. Sites that may have been un-developable before, now become developable. This makes it easier for us to achieve the European-scaled mid-rise vision that Toronto has for its avenues.

But for reasons that I am sure you can guess, there are concerns with this performance standard. Probably the most obvious is that, to a certain extent, it destabilizes “neighbourhoods.” And they are intended to be completely stable entities that see little to no intensification. As soon as you allow this to happen, properties sitting in Enhancement Zones would become the prey of developers.

However, there are counter arguments you could make. The owners of these properties would likely receive offers above market value. So maybe they end up better off. At the same time, you could also argue that the more development we unlock outside of “neighbourhoods”, the more stable they can actually remain.

In any event, I’ve been thinking about this lately and I thought it would be interesting to debate the pros and cons of these magical-sounding Enhancement Zones. For those of you inclined to engage in geeky planning discussions, I’d love to hear from you in the comments.