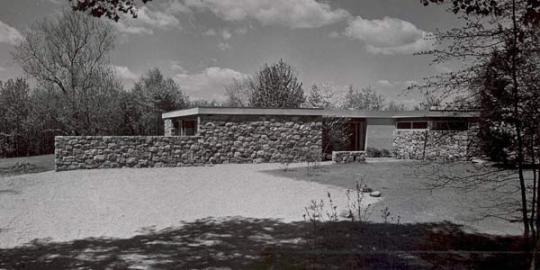 Breuer House II is currently on the market in New Canaan, Connecticut for $5.85 million. The house has 4 bedrooms, 4 full bathrooms, and 2 half bathrooms. It is 4,777 square feet and sits on 3.11 acres of land.

Originally built in 1951, the house was designed by the Hungarian-born, Bauhaus-trained, and Harvard-teaching modernist architect, Marcel Breuer. It served as their family home until 1975, after which time it was sold and almost demolished. Thankfully it was instead purchased, restored, and expanded (by another Harvard architect).

Marcel Breuer was a member of what is known as the Harvard Five. They were a group of five architects who either taught at or went to the Harvard Graduate School of Design and who had moved out to New Canaan to build experimental modern homes starting in the 1940s. Homes like Philip Johnson’s Glass House.

Seeing the Breuer House II listed for sale this morning reminded me of how cool it must have been at the time for a bunch of radical architects to move out to a sleepy New England town and start building modernist boxes. I’m sure it pissed off more than a few people.

Does anyone know of anything similar to this happening today? 🙂