I’ve written quite a few posts about family formation and, more specifically, about where Millennials will move once they start having kids.

Many seem to believe that – despite the current Millennial love affair with urban centers – much of this cohort is destined to repeat the pattern of the previous generation. Meaning, once the kids come along, they’re headed to the suburbs in search of bigger and more affordable housing.

If you look at the data, there’s a lot to support this prediction. Below is an interesting chart from Nathanael Lauster (Professor in Sociology at the University of British Columbia) that looks at net migration by age group for the City of Vancouver and the metro area. 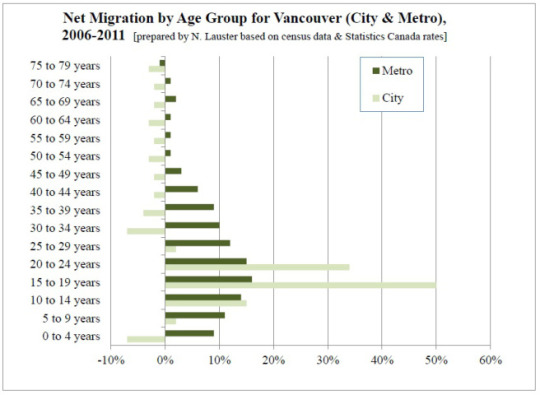 What this chart shows is a flood of people in their late teens and early 20s migrating into the city (many of which are likely students), but then a fairly dramatic net loss of people leaving the city as they enter their 30s. The metro area, however, continues to grow – almost certainly because of people looking for more suitable family housing.

But this data is from 2006-2011. We don’t yet have the 2016 census data. And I suspect that we will start to see an increase in the number of people opting to remain in the city across many different urban centers.

There are some very real economic pressures that successful cities today have to contend with. But I believe that the desire to remain in the city is there for a lot of young people.