When I was in Revelstoke, BC last year I met a number of people who had made the move out there from Toronto. When I asked if they missed living in a big city, pretty much everyone gave me the same answer: “No, I love it here.”

This past week when I was in Park City, Utah, I similarly met a number of people who had made the move from New York and other large cities. And when I asked them the same question, I heard statements like: “I used to live in New York, but then I got a life and moved out here."

In these two examples, the obvious draw is the mountains. But it’s not like everyone just moved and became a ski bum. In fact, Inc Magazine recently published an article talking about Park City’s robust startup scene. People are figuring out how to combine hard work with the lifestyle they want.

What I find interesting about this is that it runs counter to the trend of young people preferring big cities. Here’s a quote from NPR:

“But affordable real estate and waterfront views don’t have millennials biting. They continue "a multigenerational pattern of young adults preferring more expensive urban areas over lower-cost rural ones because the lifestyles and opportunities in such places make the extra burden of cost worth it,” says Robert Lang, professor of urban growth and population dynamics at the University of Nevada, Las Vegas.”

However, some small towns clearly have a unique lifestyle advantage: mountains. And that seems to be a strong enough draw that some people are simply figuring out how to create the economic opportunities for themselves.

For me, this is yet another reminder that if you’re trying to attract the best human capital to your city or town, you need to think about lifestyle. And since young adults aged 18-34 are far more likely to move around than any other generation, you should also be thinking specifically about what this generation wants.

Here’s a chart from CityLab that shows how precipitously migration falls off (in the U.S.) once people finish school and get settled in a job: 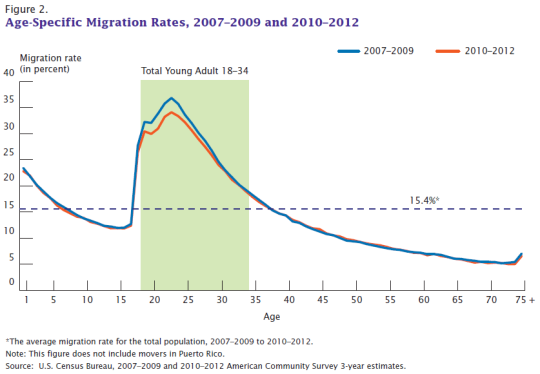 Obviously, not every town or small city is blessed with mountains. But there are many lifestyle advantages that can be created. It’s for this reason that I keep talking about nightlife and Toronto’s laughable 2AM last call. Those are lifestyle things and we can do better.