Here on ATC, we’ve talked a lot about the changing nature of work and what that could mean for cities.

We talk (and debate) about the value of density and of being in close proximity to others so that ideas can percolate – whether that means open office floor plans or community coffee shops.

But alongside all of this, there are some fascinating structural changes taking place within organizations. Below is an excerpt from a recent New York Times article called, How Larry Page’s Obsessions Became Google’s Business.

But corporate success means corporate sprawl, and recently Google has seen a number of engineers and others leave for younger rivals like Facebook and start-ups like Uber. Mr. Page has made personal appeals to some of them, and, at least in a few recent cases, has said he is worried that the company has become a difficult place for entrepreneurs, according to people who have met with him.

Part of Mr. Page’s pitch included emphasizing how dedicated he was to “moonshots” like interplanetary travel, or offering employees time and money to pursue new projects of their own. By breaking Google into Alphabet, Mr. Page is hoping to make it a more welcoming home for employees to build new businesses, as well as for potential acquisition targets.

What I find interesting about the statements I’ve bolded is that they represent a radically different approach to business and employment. Of course, it’s not really a new thing. Google has been encouraging its employees to work on personal projects since, I think, the very beginning.

But as you read the above article, you really get the sense that Page believes that this kind of organizational culture is fundamental to the long term competitiveness of the company. It’s something he is genuinely worried about.

As counter intuitive as it might seem to encourage employees to work on other things besides the core business, one could argue that it’s almost essential in a world of rapid and constant innovation. Would you rather an employee or a competitor discover what’s next in your industry? If it’s the former, you have a chance of absorbing it into your current business. If it’s the latter, you’re already too late.

If you go back to the article I posted earlier this week, you’ll see that creative destruction is happening a lot faster than it did in the past. The average life span of many, or most, companies seems to be decreasing. 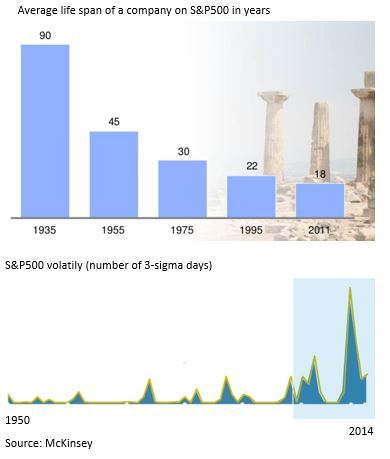 The tech sector seems to be ahead of most other industries with respect to this kind of thinking. But I believe that it will continue to percolate through the economy. And when it does, it will probably have many impacts on the kinds of spaces we design and build in our cities.