Daniel Hertz over at City Observatory just published a post talking about why land costs are so important when it comes to home prices. More specifically though, his post is intended to refute a claim that multifamily housing is always going to be more expensive than single family housing.

The key concept here – which is critical to understanding urban real estate economics – is that home values are essentially made up of two things: the land and the improvements (i.e. the building).

When home prices rapidly appreciate, as has been the case in cities like Vancouver (see below) and Toronto, it’s not the building, but the land that’s really driving the price up.

And as you can see from the chart below (which Daniel shared in his post), it is possible for multifamily housing to be less expensive than single family housing. 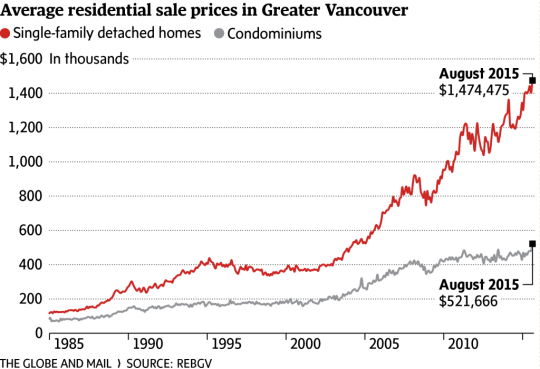 So why was someone arguing that multifamily housing is more expensive?

Well if you look at just construction costs, then this is generally true. Single family housing is typically wood frame construction, whereas multifamily housing is usually reinforced concrete or some other material that allows you to build up. In these latter cases, the price per square foot to build is going to be higher.

But Daniel’s argument is that when you build multifamily housing, you also begin to amortize the cost of the land over more housing units. So you begin to use land more efficiently and that offsets the higher construction costs.

However, two thoughts come to mind.

Second, a big part of why condominiums are so much more affordable is that they’re smaller. In 2014, the average condo size in Metro Vancouver was estimated to be 840 square feet. I couldn’t find the average size of a detached house in the city, but let’s assume for a second that it’s 2,500 sf.

If that were the case, then a detached house, despite being more expensive overall, would still be cheaper on a per square foot basis. You would be paying less for every square foot of livable space. True that doesn’t make the house more affordable, but I think it’s a bit unfair to compare apples (small condo) to oranges (large house).

So what I would really like to see is a graph of all-in low-rise and high-rise per square foot prices over time and for various cities. Because I would be curious to see at what point – if ever – they intersect.