Conor Maguire introduced me to an interesting site today called Airbnb vs. Berlin. The site does a deep dive into Berlin’s Airbnb market with the hope of answering the question: Is Airbnb contributing to a shortage in affordable housing?

The site is very well done. It’s filled with lots of great market stats and diagrams such as this one here: 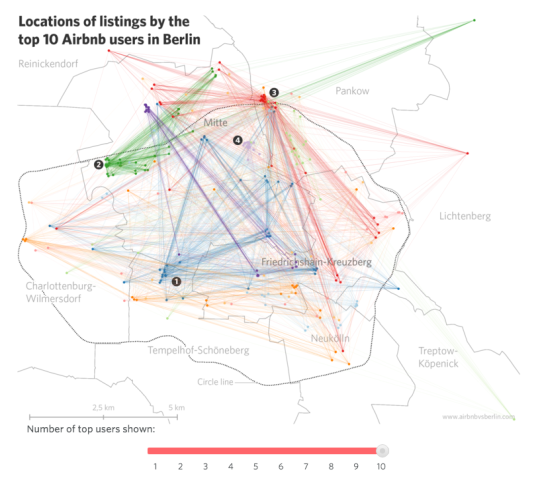 Of course, the impetus for a site like this is that cities all around the world, from San Francisco to Berlin, are grappling with rising home prices. If you happen to live in a successful, growing city, that’s probably what is happening.

But when this happens, we seem to want to look for something or someone to blame. In San Francisco it’s the tech workers. They’re the ones driving up homes prices. In Vancouver, it’s the foreign Chinese buyers. And in Berlin, it’s those Airbnb users who are just out to make a profit. In all of these cases, we like to tell ourselves that if we could just get rid of “X”, everything would be much better.

But I think sometimes we forget that this is also the result of doing many things right.

If Berlin wasn’t a brilliantly cool place to visit, then tourists wouldn’t come. And if tourists didn’t come, then Berlin wouldn’t have, by far, the largest Airbnb market in Germany. If Vancouver wasn’t one of the most enjoyable places in the world to live, you wouldn’t have the same attention from overseas buyers looking to snatch up properties.

So in a way, we should be asking ourselves: How do we, as a city, manage our own awesomeness?

The other thing that Airbnb vs. Berlin reminded me of is the viewpoint that profits are some dirty little secret. I hear it all the time in the real estate development business. People will say: “That developer is just out to make money.” Of course she/he is! They operate a business. And like all for-profit businesses, one of the objectives – it may not be the only one – is to make money.

I say all this not as a direct response to the website. They remained fairly neutral in their analysis. Instead, I raise it as an alternate viewpoint in the seemingly universal battle against “X.”

In case you’re wondering about Berlin’s Airbnb market, the site estimates that there are roughly 11,701 Airbnb listings in the city out of a total of about 1.9 million flats. Of these listings, it is estimated that somewhere around 30% are by “professional users” who are only out to make a profit and are not participating in the “sharing economy” in its purest sense. That equates to about 0.18% of all Berlin flats.

Based on this number, I’d say that Berlin’s cool factor probably has a lot more to do with the city’s rising rents than do the profit seeking Airbnb users.