Brutalism is an architectural movement that most people, other than architecture nerds, hate. Derived from the French words for raw concrete – béton brut – Brutalist architecture is characterized by its use of exposed concrete and its imposing fortress-like qualities.

Most people find it too cold, sterile, and impersonal. But this 99% Invisible episode perfectly sums of where I think we sit with this era of building:

“Back in the 1960s, Victorian style buildings were considered hideous and impossible to repair. We were tearing batches of Victorians down to erect big concrete buildings. But some Victorians were saved—and today, some of them are considered treasures.

Concrete architecture now finds itself at an inflection point: too outdated to be modern, too young to be classic. And a small, but growing band of architects, architecture enthusiasts, and preservationists, would like us to just wait a bit and see.

Maybe, with a little time, we’ll come around to love these hulking concrete brutes.”

Concrete can be a wonderful building material all on its own. I mean, just look at the work of Tadao Ando.

But all concrete is not created equal. Here is a taxonomy of concrete textures that was also part of that same 99% Invisible episode: 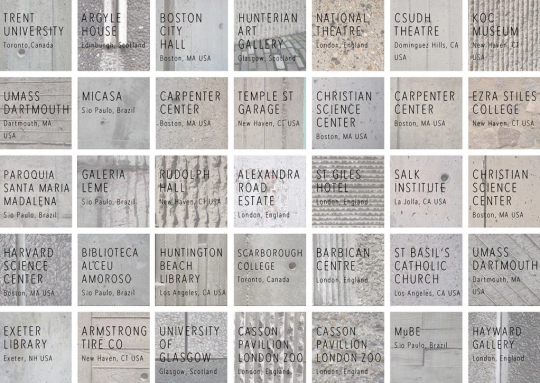 Most cities have a rich history of demolishing (or almost demolishing) buildings and neighborhoods that today we would (or do) treasure. Which tells me that we’re not always very good at figuring out what has value or will have value in the future.

So maybe some of those brutes are worth a second look.