One of the reasons I decided to start blogging was because I saw how open the tech community had become – with respect to sharing their ideas and experiences – and I thought that the same thing could and should be done in real estate, as well as in city building more broadly.

But in many ways, the real estate industry is the antithesis of the tech industry. We are slow moving and secretive of our ideas. Now, some of this is driven by fundamental differences in terms of how these two sectors operate. It’s a lot easier to test and iterate on your ideas in tech than it is with actual bricks-and-mortar. But I still think about ways in which we, in real estate, could be pushing the envelope.

As one example of what I’m talking about, take Union Square Ventures in New York. They call themselves a “thesis-driven venture capital firm”, which means they come up with a framework and core set of ideas, and then use those to drive their investment decisions.

You would think that these frameworks and ideas would be pretty sensitive. I mean, they are the core drivers of their business. But their entire website is actually set up around sharing and collaborating – with the public – on these ideas. Here’s a screenshot: 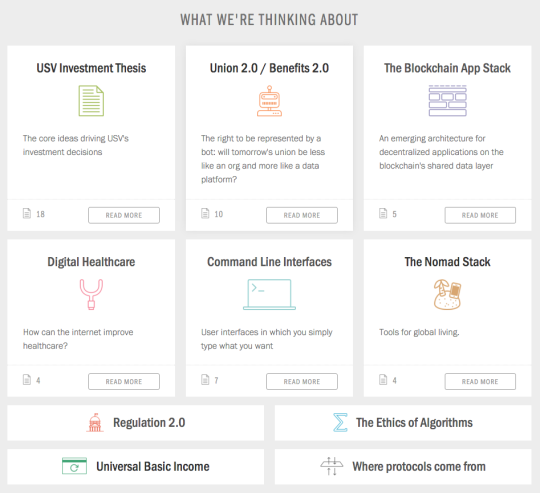 Many of you, I’m sure, would argue that there are risks to doing this. But there are also benefits, some of which are driven by collective intelligence. By sharing their ideas and hypotheses with the public, it helps to evolve their thinking. After all, their investment thesis is not a static thing. It grows over time.

But in addition to this, it also makes it abundantly clear to their customers (entrepreneurs) what they believe in and what they look for. And I am sure this helps them with deal flow. More and more customers aren’t just “buying” a product, they are also “buying” a philosophical underpinning and belief system.

Can you imagine a real estate firm doing something like this? I can. But it’s not happening yet, as far as I know.