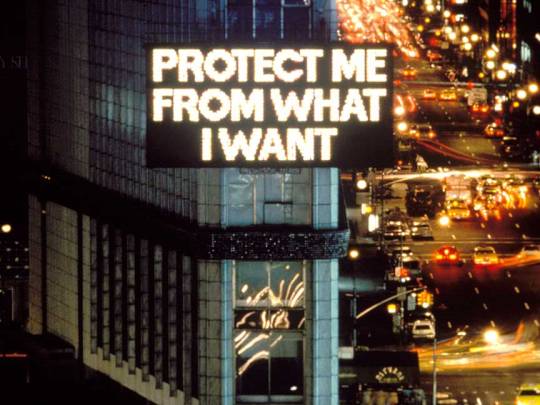 The title of this post is a line from one of the works of Jenny Holzer. It feels appropriate right now.

On Wednesday, Toronto saw a large scale anti-Uber protest involving as many as 2,000 taxis. It involved a bunch of taxis driving real slow around downtown, some altercations, and lots of people who want to see Uber completely shut down.

This, of course, isn’t a new thing for cities.

Many cities around the world have seen similar kinds of protests. But many of you will probably also agree that this is not the most effective response from the taxi industry. It casts a negative light on them at a time when people are already switching to Uber for better service. It also ignores the fact that – in my view – Uber ain’t going anywhere.

I’ve been a vocal supporter of Uber on this blog and I continue to believe that it will continue to prove to be a good thing for both consumers and for cities. In fact, famed startup investor Paul Graham once tweeted that because Uber is so clearly a good thing, you can tell how corrupt a city is by how hard it fights against it. This has become the truism among today’s urbanites.

At the same time though, I am trying to take a balanced view on this issue, which is what got me thinking about the work of Jenny Holzer. Protect me from what I want. Today, I want Uber. But I am trying to think of where that want might lead me.

Like a lot of private companies, the goal of Uber is monopoly profits. They would love to control the market. And that’s not a knock against them. It is just business. But I am imagining a market where only Uber exists.

When I was in Miami last week I switched back and forth between UberX and regular taxis. Because Art Basel was going on, Uber was frequently in surge pricing. Sometimes as high as 4x. So in those cases, I just hailed a regular cab. Thankfully the cabs there are pretty reasonably priced and easily to hail. The driver didn’t ask me if I liked the electronic music playing on the satellite radio, but that’s not a big deal.

But what if I didn’t have the option of hailing a regular cab? What if Uber was my only option and I had to put up or shut up when prices were 4x? That would be suboptimal in my books.

So what does this all mean?

I am an Uber customer. I do not want and I do not believe it will go away. But I also believe that our public policy should encourage competition in the taxi marketplace. Competition holds people and companies accountable. It means that if you stop creating value, you will go out of business.