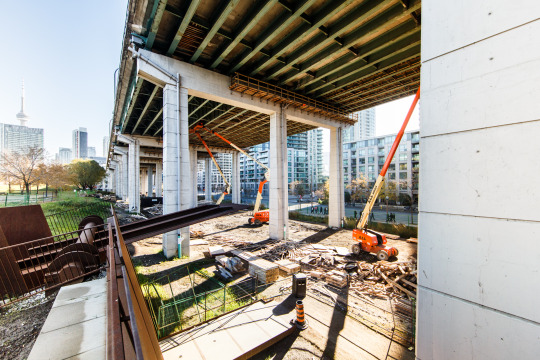 If you’ve been reading this blog since the summer, you might remember that there was a period of time where I wrote incessantly about the removal of the eastern portion of Toronto’s elevated Gardiner Expressway.

Ultimately City Council didn’t vote the way I believe we should have. But I remain hopeful that somehow we will manage to do the right thing and replace it with a surface boulevard. Now – before the east waterfront gets developed – is the right time to make that happen.

However, the western portion of the Gardiner Expressway is a different story. The adjacent area is already developed and it is unlikely that this highway is going anywhere any time soon. So for the foreseeable future, we are stuck with it.

And if we are stuck with it then we should make the absolute best of it – even celebrate it. Which is why Toronto is buzzing right now with the news that a 1.75 km stretch under the western portion of the Gardiner Expressway will be remade into a vibrant public space by 2017. This is thanks to a generous $25 million private donation. (Is that enough money?)

Here’s the overall programming strategy, going from west to east (via undergardiner.com): 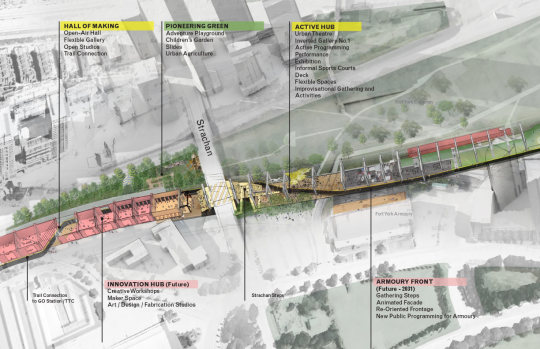 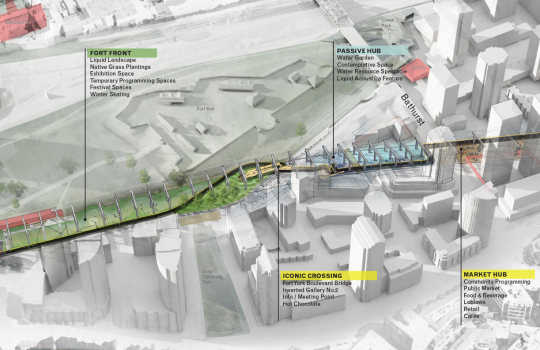 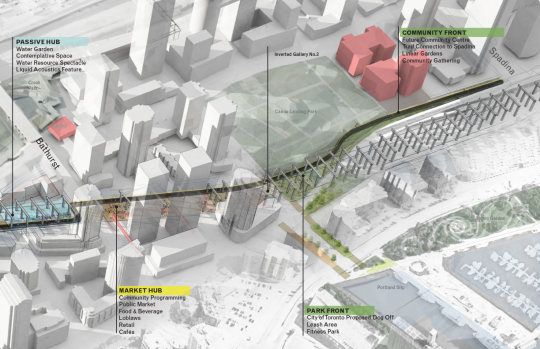 And here are two renderings:

The first phase is expected to run from Strachan Avenue in the west all the way to Spadina Avenue in the east. That is what is shown above.

Two key elements include a grand stair at Strachan Avenue, which looks like this today (via Google Streetview):

And a pedestrian bridge over Fort York Boulevard, which looks like this today:

All of this doesn’t change my opinion of the Gardiner East, but I do believe that this is an incredibly exciting opportunity for the city. Today the space under the Gardiner is a void in our public realm.

I also think it could be quite interesting to have these two opposing urban conditions along the central waterfront. A linear underpass park in the west and an open air boulevard in the east.

It’s also exciting to see private money step up. It goes to show you that there is no shortage of passionate city builders in this town.