For whatever reason, some of the people living in high-rise buildings believe that if you flick a cigarette butt off a balcony that it will magically disintegrate on the way down. It’s either that or they don’t give a shit about anyone else.

Because if you happen to live in or manage a building which has patios or terraces at the base of tower, I bet you have this problem: 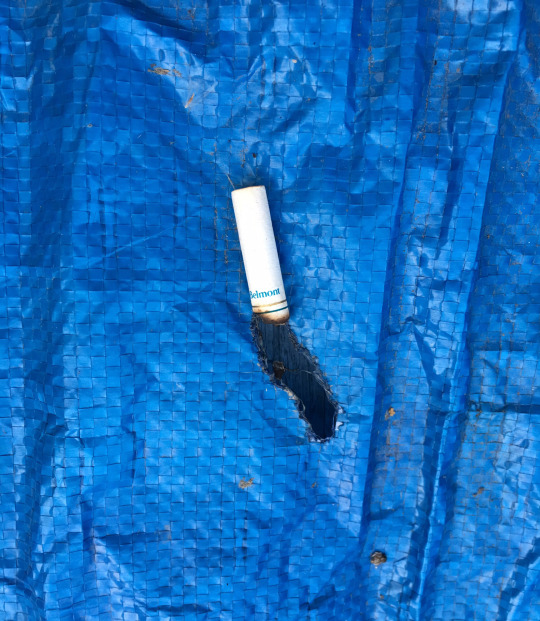 Above is a picture of a Belmont cigarette burning through the tarp covering the wooden harvest table on my patio.

It’s a destruction of property, an environmental concern (many butts end up in stormwater drains), and a pretty scary fire hazard. I know of many incidences where thrown cigarette butts have started fires in a high-rise building. It happened last year in my mother’s building.

However, the frustrating thing about this problem is that it’s exceptionally difficult to stop. I know this because I sit on the board of my condo building. The typical response is for management to send out notices to all the residents asking them to stop doing this. But frankly, that does nothing.

So if any of you know of a company or service (or have a product idea) that can help with this, please contact me. But if no such company or service exists, I am positive that you could create it today and sell to almost every condo corporation and property management company that have a condition where terraces or patios sit below a tower. Because inevitably, there will be someone upstairs throwing butts.

Many buildings have a similar issue with dog poo. People simply don’t pick up after their dogs. So some property managers have started taking stool samples of every dog who lives in the building. That way they can easily determine which residents aren’t picking up after their dogs. I guess that’s what it takes to get some people to give a shit.

Of course, this isn’t a problem just in buildings. Cities in general are always fighting litter. That’s why you see ideas like this pop-up:

This particular one (in London) was designed to stop people from throwing their cigarette butts on the street. Instead, you use your butt to vote. In this case: England vs. Australia.

We talk a lot about big ideas here on Architect This City. What driverless cars will mean for cities, how laneway housing could help with housing affordability, and so on. But the smallest ideas can also matter a lot for city building. Sometimes we forget that.