City
Observatory recently republished their
commentary on a report (released earlier this year) called Who Pays
for Roads. I missed their original post, so this is new to me.

The report
and commentary are all about the mispricing of roads/driving and the fallacy
that “user fees” (gas taxes, tolls, and so on) are enough to completely cover
the costs associated with driving.

I have been
a vocal supporter of road pricing and/or congestion charges here in Toronto, and
so I’d like to share two pieces from their commentary.

The first
is this paragraph, which talks about how mispricing leads to demand issues
(i.e. traffic congestion):

The conventional
wisdom of road finance is that we have a shortfall of revenue: we “need” more
money to pay for maintenance and repair and for new construction. But the huge
subsidy to car use has another equally important implication: because user fees
are set too low, and because, in essence, we are paying people to drive more,
we have excess demand for the road system. If we priced the use of our roads to
recover even the cost of maintenance, driving would be noticeably more
expensive, and people would have much stronger incentives to drive less, and to
use other forms of transportation, like transit and cycling. The fact that user
fees are too low not only means that there isn’t enough revenue, but that there
is too much demand. One value of user fees would be that they would discourage
excessive use of the roads, lessen wear and tear, and in many cases obviate the
need for costly new capacity.

And the second is this chart, which shows the cumulative net
subsidy to highways in the US from the late 1940’s: 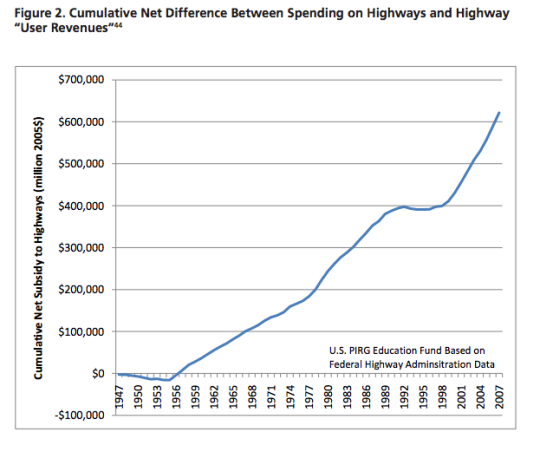 The point of all this is that when you subsidize something
it’s because you’d like to see more, not less of it. So why then are we even surprised by the crippling traffic that plagues our
cities? We are doing a lot to encourage exactly that.