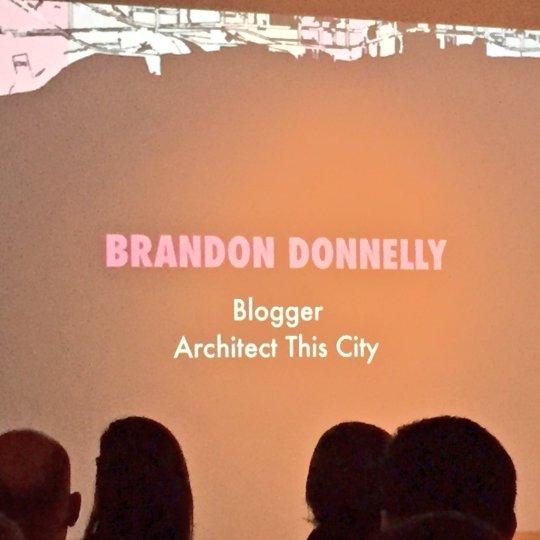 Tonight I attended and gave a short talk at a city building themed PechaKucha night here in Toronto. If you aren’t familiar with the PechaKucha 20×20 presentation format, click here.

The first PechaKucha night was held in Tokyo, but it has since expanded to over 800 cities around the world. Each city has a local organizer who acts as a steward and here in Toronto it is Amy Bath. She did a fantastic job this evening.

Tonight’s event was all about non-traditional forms of city building. It was not so much about how architects and developers are shaping the built environment – thought there was some of that. It was more about how interdisciplinary artists, graphic designers, bloggers, and others, are having an impact on cities. So in my case, I was speaking as a blogger, rather than as a real estate developer, which was a bit unique for me.

What excited me about tonight is the amount of talent and passion that we have in this city, and how so much of it is being harnessed to make cities better.

Jay Wall of Studio Jaywall is doing incredible work at the intersection of graphic design and city building. My friend Mackenzie Keast of Distl and NXT City Prize is organizing public space competitions and then working with the city to get them built. And my friend Justin Broadbent, who is an interdisciplinary artist, is just killing it and putting Toronto on the map. I don’t know how else to say it.

And this is just naming a few of the people in attendance.

I have so much respect for people who love the city they call home and actively try to make it a better place. That’s a lot harder to do than just complain about why your city isn’t (insert other allegedly better city here). But it’s also a lot more productive.