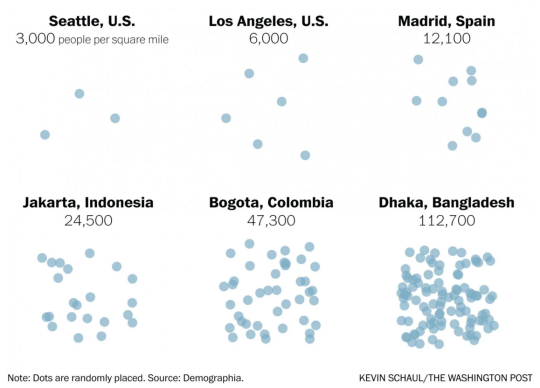 Earlier this month The Washington Post published an article called, There’s no such thing as a city that has run out of room.

And what it was really about was that when we say there’s no more room (I guess people are saying this), we are really saying that we just don’t want to allow anyone else to become our neighbor. Because the reality is that urban population densities vary widely around the world. So how can you really call a place full?

Here are are two scenarios I ran:

It’s important to keep in mind that these numbers are averages for the entire economically contiguous region. So it tells you nothing about the potential spikiness of certain areas. That’s why the population density of New York (which includes portions of New Jersey and Connecticut) probably seems low to you.

Still, it’s fascinating to see how extreme some cities – including some first world cities like Hong Kong – can be. Clearly many cities have a lot of room to become a lot more dense. And I think that would be a good thing.