There has been and continues to be many divided cities around the world.

Berlin had the Berlin Wall.

Northern Ireland (mostly Belfast) has its Peace Walls that still separate Protestant loyalists and Catholic republicans from each other.

Beirut had the Green Line, which separated the predominately Muslim side in the west from the predominantly Christian side in the east during the Lebanese Civil War. And I understand this is still the case today.

Detroit has 8 Mile Road, which is a psychological barrier rather than a physical one, but one that still sharply separates whites (blue dots, below) and blacks (green dots, below). The image below is from Wired Magazine. 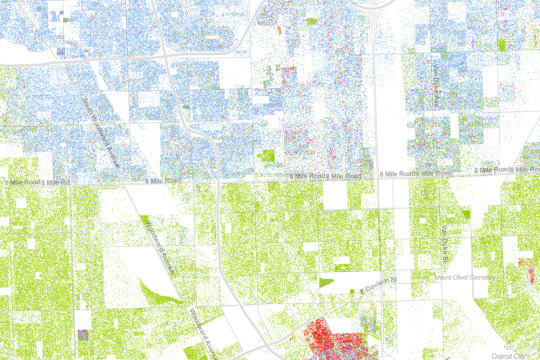 And even here in Toronto you could say that we’ve become a divided city, albeit without the civil wars or race riots that have plagued the other cities listed above. Our voting patterns suggest a real urban-suburban divide and the many ethnic groups in this city continue to concentrate themselves in specific areas.

I’ve been thinking about this phenomenon in the context of a recent article I read talking about closed vs. open social networks. The article was talking about career success, but I think the lessons are also transferrable to cities.

And the reason for this is because people in open networks end up getting exposed to a broader set of viewpoints and ideas. They get a more accurate view of the world and they are able to problem solve better than those who may be coming at it from a more myopic or singular perspective.

But the challenge with open networks, is that there seems to be an innate human tendency towards closed networks. We love what is familiar. We love what is comfortable to us. In other words, we are attracted to people that are similar to ourselves. This is known as homophily.

So it’s not surprising that we tend to cluster ourselves in cities. Yes, there are economic benefits to doing so (known as agglomeration economies), but there’s also a certain feeling of solidarity that comes from being around other people with the same view of the world. There’s no tension because everyone has the same beliefs, whether that be religion or politics or sports or what to eat.

That’s why some people believe that tolerance is a critical ingredient to fostering creativity in cities.