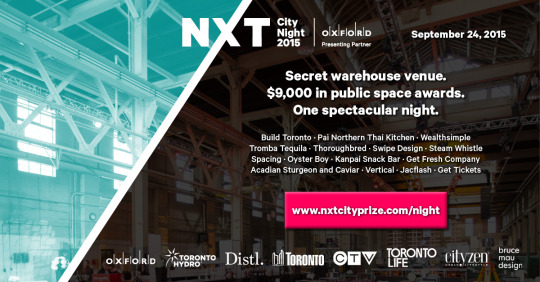 I just got
my tickets for NXT City Night,
happening Thursday, September 24, 2015 at 6:30pm here in downtown Toronto.

If you’re
not familiar with NXT City Prize, it’s an annual urban design competition where
young Canadians (35 years of age or younger) submit ideas to improve the built
environment. The top submissions win a total of $9,000 in prize money and the winning idea
gets paired up with the City of Toronto work on actually implementing it. That’s
the best part.

The 2015
finalists have already been announced, here, but the top submissions
will be announced at NXT City Night. The Chief Planner of Toronto, Jennifer
Keesmaat, will be there, along with the
competition’s very impressive jury.

I think it’s
important to keep in mind that a lot of what makes cities great often happens
through citizen-led grassroots movements.

The
High Line in New York – which today attracts over 5 million visitors a year
and is believed to be responsible for over $2.2 billion in new economic
activity – was really the work of 2 friends who thought that preserving and
repurposing the High Line was a cool idea. Which is why in 1999 they founded a
non-profit called Friends of the High line. Amazing things happen when people and
passion get involved.

So I would
encourage you to grab a ticket and join me at NXT City Night next week. Tickets are
$25, but if you use the coupon code ATHISCITY,
you’ll get $5 off your ticket 🙂

The event is
also taking place in a spectacular old warehouse building at 56 Maud Street
(formerly St. Andrew’s Market Hall). That alone is reason enough to come. I’ve been inside before. Get your Instagram ready. But
if that’s not enough, there’s also:

I hope to see
you there. Make sure to tweet at me
if you’ll be there so we can connect in person.