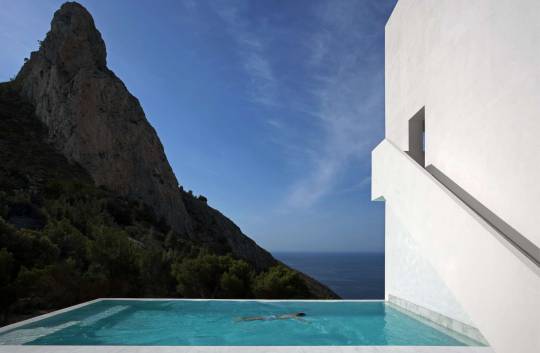 There has always been a strong relationship between architecture and film. Next to actually being there, video is one of the best ways to experience architecture.

And that’s because space is not static. A big part of how we experience space has to do with what it feels like as you move through it.

For example, American architect Frank Lloyd Wright was notorious for his sprawling horizontal houses and low ceiling heights. In his Fallingwater House (which is stunning), I swear that my head was rubbing on the ceiling in certain rooms (I’m 6’3").

But he did this to purposefully create a feeling of compression. Because then as you exited the room (in this case to go outside onto a terrace) the feeling of openness and expansion is all that more powerful. The contrast creates awareness.

In honor of the cinematic nature of architecture, below is a magnificent video of the Casa del Acantilado (House on the Cliff) by Fran Silvestre Arquitectos. Pay attention to the sliding planes and framed views throughout.

The image shown at the top of this post is from Architizer.