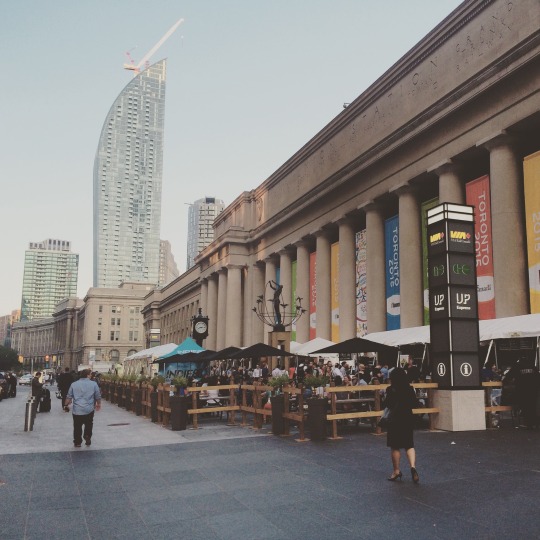 Given yesterday’s post about Times Square in New York, the timing is perfect to talk about the revitalization of Union Station here in Toronto, its new public spaces, and the programming that’s now happening in and around the station.

Perhaps the most noticeable is something called Front Street Foods @ Union Summer, which is an outdoor food market set up along Front Street. It’s on this summer from July 6th to September 27th, 2015.

However, Front Street Foods is only one part – the food part – of a larger events and programming strategy known as Union Summer. I recently had a quick chat with Brad Keast of Osmington, who is involved in a lot of what’s happening right now at Union Station.

Tell us a little bit about you and your company’s involvement with Union Station.

I’ve been with Osmington for over 4 years now and Union Station is a major focus of my waking life.

The company won a public RFP with the City of Toronto in 2009 to be the City’s retail partner in the redevelopment. What this means is that while the City owns the building and is doing base building construction, we are overseeing all the retail, advertising, and special events and programming. We are finding all the tenants, doing a bit of overshell work and then turning it over for fit-up.

We think the real special part of the project comes in through the special events and programming. We really want to make the station a destination in itself and you’re starting to see that with some of the programming we’ve done this year, be it a contemporary art event like Villa Toronto or something more community-focused like Union Summer – the current animation of the area in front of the station.

How did the idea for Union Summer come about?

This really was a collaborative internal effort. We started by thinking ‘hey, let’s put a bunch of tables and chairs on the new plaza in front of the station and see what happens.’ Then we added in the idea of food. We knew it had to be accessible but didn’t want traditional food trucks, rather something less mobile but still not permanent.

That’s when we reached out to Toronto Market Company and they started rounding up the vendors. Then we layered on entertainment – daily music be it live or DJs, as well as a movie night with the Toronto International Film Festival (TIFF). We even have some kids programming on the weekends. Then we worked with the Farmers’ Market being displaced from Nathan Phillips Square due to Pan Am this year to have them here on Wednesdays.

What was involved in making Union Summer a reality? What was the biggest surprise and/or hurdle that needed to be overcome?

There was a tremendous amount of coordination needed. First we weren’t sure when the construction was even going to be finished, all that was certain was it would be before Pan Am started.

Then the infrastructure required for the event itself was an exercise in creativity – power, water, and grey water disposal in particular. There was a lot of meetings with City officials for things like building permits, fire code, council approval to apply for a liquor permit, and health and food safety measures. Operationally things like loading in, coordinating with the installation of the Pan Am banners between the columns, interim furniture when our original order didn’t make it onto a ship in Antwerp, and then the first week was so busy that some vendors started losing staff because they were burnt out.

Like all things with this project we have to be mindful that this is an operating train station. In fact it’s the busiest building in the country with over 250,000 people per day passing through so we can’t impede those operations. We’ve done our best and have learned some lessons along the way and the reception has been overwhelming.

One of the best things about having that many entrepreneurs in close proximity is that some vendors have been pairing up to try experiments. Frozen custard-stuffed churro?

Toronto is getting much better at designing and programming its public spaces. Given your experience with Union Summer, is there something the city could and should be doing to encourage more of these kinds of urban activations?

Well, first of all, our contacts at the City, in particular Denise Gendron and Scott Barrett in Real Estate Services have been incredibly supportive of our efforts and we couldn’t have done it without them. If I could make one recommendation it would be to build in the supportive infrastructure for services. Of course that’s only beneficial if there is someone to take charge of the space and program it appropriately. It’s not a part time job.

What’s next for Union Station?

Right now the focus is on getting the first retailers open on GO’s new York Concourse. On the programming side we will host art for Nuit Blanche (October 3rd, 2015). That promises to be exciting. And then opening November 30th, 2015 is the Holiday Market. It was a huge success last year so we’re bringing it back for 3 weeks this time.