On my way back from Philadelphia
this past weekend I wrote a post called, The
Philadelphia (real estate) story. It was about how opposite the market is
in Philly compared to Toronto.

After writing that post and
because of a discussion in the comment section, I started thinking about condo
vs. rental apartment development across the US. Because unlike cities such as
Toronto and Vancouver, it struck me that – outside of maybe New York and Miami
– most U.S. cities are really not building a lot of for sale condos. And if
you’re from Toronto or Vancouver, I bet that feels odd to you.

But what exactly is that number?

As of the first quarter of 2015, condos as a percentage of all new
multifamily (apartment) construction in the US was only 5.5%. That’s a tiny number and is down from
over 50% before the Great Recession, which means most
cities in the US really are building mostly rental. Last year the US built 264,000
multifamily units across 11,000 buildings. 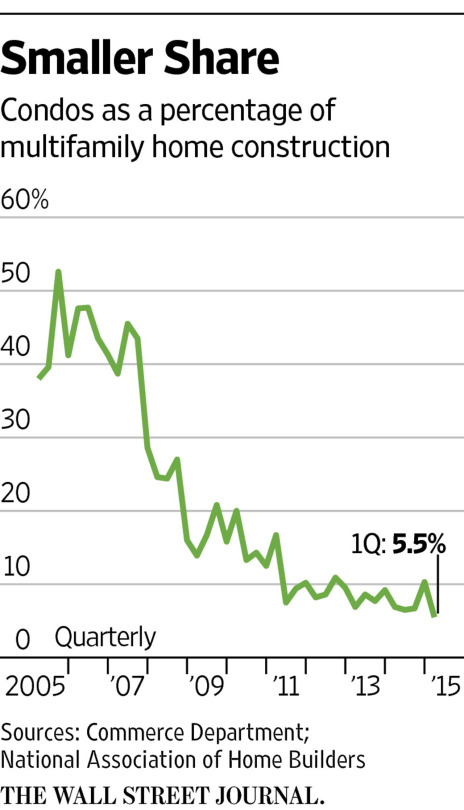 So why is that happening?

There appears to be a number of
factors, according to a
recent article in the Wall Street Journal.

There’s a supply side
constraint:

Another obstacle cited by developers: construction loans. Matt
Allen, chief
operating officer of the Related Group, a developer based in Miami, said he can
get a construction loan for roughly 75% of the cost of building an apartment
complex. But lenders will cover only 50%, on average, of a condo complex’s cost
because of the greater risk, he said.

There’s a demand side
constraint:

As a result, the Federal Housing Administration, which
backs mortgages made to low-wealth buyers, tightened its lending standards in a
series of moves from 2008 to 2012. Under the new rules, in order for the FHA to
insure mortgages in a given condo complex, at least half of the units must be
owner-occupied and no more than half can be FHA-insured, among other
requirements. For condo projects under development, at least 30% of units must
be under contract for sale before the FHA will start backing mortgages there.
Mortgage giants Fannie Mae and Freddie Mac tightened
their standards as well.

And there are macroeconomic
factors:

On the entry-level end, tepid job growth early in the
recovery and the younger generation’s affinity for flexibility have fueled
demand for rentals. Apartment rents are up nearly 16% since 2010, according to Reis Inc.

Notwithstanding
the above, could this be a post-recession policy pendulum that has swung
too far in one direction?