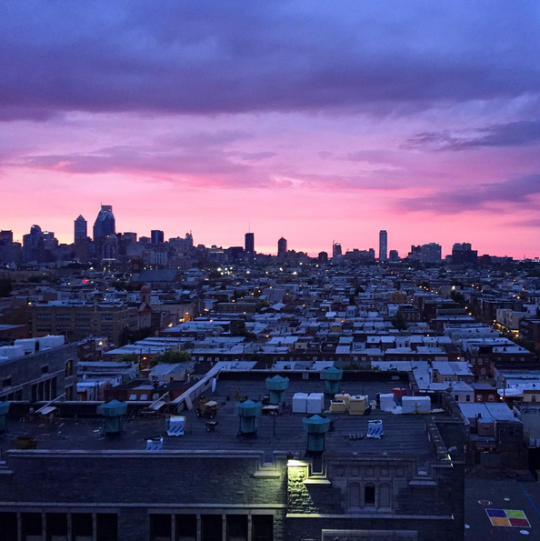 Today’s ATC post – which happens to be a guest post – is coming to you live from on board the UP Express train that runs from Union Station in downtown Toronto to Pearson Airport. (Everywhere should have free wifi.)

I’m on my way to Philadelphia and I’ve been wanting to try this train since it opened earlier this summer. It feels great to finally ride it. It’s everything I could have hoped for. It even has that new car smell 🙂

Last month I wrote a post called, 10 reasons to visit Toronto right now. It was in honor of my good friend Alex Feldman’s visit. Well now it’s my turn to visit Philadelphia and he has decided to return the favor and do a Philly version of that same post.

Alex is to Philadelphia what I am to Toronto. He grew up in Philly. He was educated in Philly (we went to Penn together). And he’s super passionate about the future of Philly. And I think that’s how everyone should be about their city.

So I hope you enjoy his list of 10 reasons to visit Philadelphia right now. It’s basically my to-do list for this weekend.

10. World Heritage City: Philadelphia is on track to become the first World Heritage City in the United States. This UNESCO designation will underscore the city’s historic importance as the birthplace of American Democracy as well as the historic urban fabric which gives the city it’s walkable, urbane character.

9. Shopping: Philadelphia has come a long way as a shopping destination. Conde Nast Traveler recently ranked the city as number 2 out of the best shopping destinations in the world. 3rd Street in Old City has become a hotbed for independent boutiques while Rittenhouse Square has attracted new chains such as Uniqlo, Theory, and Vince. More is on the way with a complete re-make of the Gallery shopping mall slated to start soon and the new East Market complex under construction.

8. The Pope is Coming:  In case you haven’t heard, Pope Francis will make his first visit to the United States – with a 3 day visit to Philadelphia in late September. The visit will coincide with the World Meeting of Families gathering. A crazy number of visitors (2 million?) are expected to descend on the city – causing Philadelphians to panic, complain, and attempt to rent their houses for ridiculous amounts of money. But this important visit will help raise the profile of the city on the international stage.

7. Building Boom: There is probably more development happening in Philadelphia right now then any other time in recent history. The skyline is growing with additions by Norman Foster, Cesar Pelli , and Kohn Pedersen Fox. New apartment buildings, condos, and rowhouses are under construction across the city (rental vacancy rates are less than 2%). In addition the Barnes Foundation and the new Singh Center for Nanotechnology mark impressive additions to the city’s architectural landscape.

6. Public Spaces: Philly’s public realm has seen massive investment over the last several years. A complete remake of the landscape outside of City Hall has become the new Dilworth Park. The designers of NYC’s highline have added two public spaces to the city (Race Street Pier and the new Central Green in the Navy Yard). And Schulkill Banks recently added a new boardwalk which the New York Times raved about when they ranked Philly as the number 3 city to visit in 2015. More is on the way with the first phase of the Reading Viaduct Rail Park expected to start soon.

5. Waterfront: Philadelphia’s Delaware River waterfront has long been cut off from the city by interstate 95. Things have started to change recently, with new trails and pier parks recently added to the working waterfront. Even Penn’s Landing, the city’s much maligned waterfront attraction is seeing improvements – including the tremendously popular Spruce Street Harbor Park – a pop-up park featuring floating beer barges, shipping container food stands, and tons of hammocks.

4. Food: Philly is one of the best food cities in the United States. So much is happening right now in the city’s dining scene, it’s hard to keep track of the latest restaurant openings. Neighborhoods such as Fishtown and East Passyunk have emerged as hot dining districts with BYOB chef driven restaurants. More can be gleaned from the Washington Post which recently summarized the dining scene better than I can.

3. Pop-up Gardens: One of the best reasons to visit Philly in the summer is the opening of the Pennsylvania Horticultural Society Pop-Up gardens. The wildly popular beer gardens, began several years ago as an initiative to remake underused or vacant lots into useful public spaces. This summer, 2 gardens – one on 15th and South and one at 9th and Wharton have been transformed into vibrant spaces for eating, drinking, and hanging out.

2. Le Bok Fin: Speaking of temporary uses, the most recent addition to Philly’s pop-up (or iterative placemaking) scene is a rooftop bar called Le Bok Fin. Situated on the 8th floor of an old vocational high school in South Philly (and named after the school’s restaurant – which in turn is a play on one of Philly’s most famous French restaurants). This is the first iteration of development at what is planned to become an amazing new center for creatives inside the old school – being led by Lindsey Scannapieco and her team at Scout LTD. Check out Le Bok Fin for incredible views of the city skyline (especially at sunset).

1. Bike Share: While a little late to the party, Philly recently launched it’s own bike share program – which is proving to be a huge success. Dubbed Indego, the new bike share is easy to use, has 60 stations, more than 600 bikes and is becoming one of the best ways to hop around town. Check one out and go explore Philly!