Tall buildings will sway in the wind. And when they get taller and skinnier, the swaying becomes more pronounced.

In seismically active cities, such as Tokyo and Taipei, “tuned mass dampeners” are often used near the top of tall buildings to offset the swaying caused by an earthquake.

But tuned mass dampeners are also found in cities like New York, so that developers can build even taller and skinnier.

Below is a diagram from the New York Times showing what one looks like and how it works. The example tower is 111 West 57th Street. 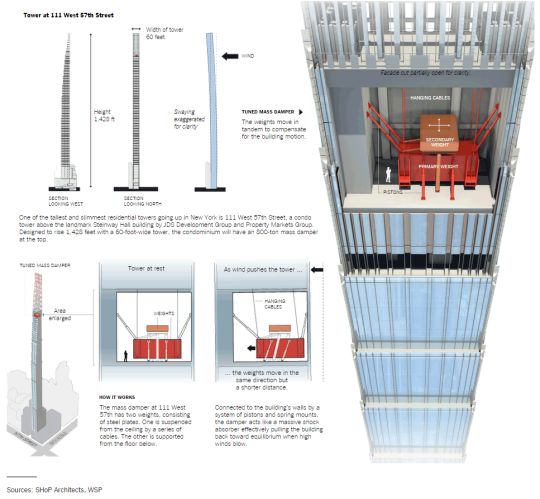 Basically the masses are tuned to oscillate at a different frequency than the rest of the tower. So when the wind blows and the tower is moving one way, the weights are moving in the opposite direction and forcing the tower back towards some sort of equilibrium.

Neat. Structures was one of my favorite classes in architecture school.