In 2009, Vancouver created policy and legalized laneway homes. (If you’re not up on laneway housing, click here. I’ve written too much about this topic.)

Since then, the number of laneway homes built in Vancouver has steadily increased to the point where roughly 350 new homes are built every year.

Here’s a chart I found showing the number of laneway home building permits issued in Vancouver since 2009 (the year to date number for 2015 is up to and including June): 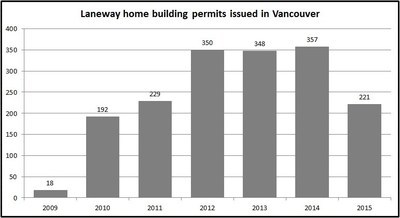 This is pretty interesting in its own right.

But as soon as I saw this chart I started wondering how these numbers fit into the overall new home construction landscape. So I decided to dig up the City of Vancouver’s Statement of Building Permits Issued for June 2015.

Now to be fair, if you add single family dwellings with a secondary suite into the mix, you get a total count of 608 new dwelling units (as of June 2015). But at 221 new units, laneway dwellings still make up a meaningful portion of the new construction market.

So while laneway houses might seem fringe for Toronto and other cities right now, they’re really not that fringe. In fact the numbers above start to show that they can be a viable source of new and relatively affordable single family housing.

Eventually other cities will realize this too.