On Monday of this past long weekend, I went for a quick bike ride over to the Beaches, up to Little India, and then back down to the St. Lawrence Market.

The ride along Lake Shore and through the Beaches is one of my favorites. Minus a few awkward twists and turns as you leave the East Bayfront, it’s generally smooth sailing. It feels a bit like a bike highway.

It took me about 24 minutes to get to the beach, which means I was traveling on average just over 20 km/h. If you lived in the Beaches and worked downtown, that would be a perfectly reasonable commute in my mind.

And it’s for reasons like this that Munich is looking to invest in a huge network of bike highways. They’re calling it a Radschnellverbindungen – which I might start ambitiously calling some of the bike paths in Toronto – and the idea is to connect the city with all of the suburbs.

Below is a map of the routes they’re looking at. The purple lines are “suitable routes” and the blue lines are corridors they’ve looked at it. If I’m wrong in my translation, blame Google. 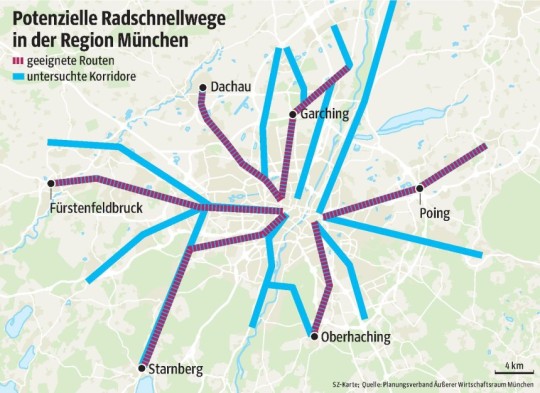 They are still in the feasibility stage, but the idea is for each bike path to be 4 meters wide and have no cross streets or traffic lights – essential a highway for bikes.

And if you think this all sounds like a pipe dream, check out this video of the recently opened Cykelslangen (Cycle Snake) in Copenhagen.

Would you commute to work on your bike if you had a highway, just like cars do?