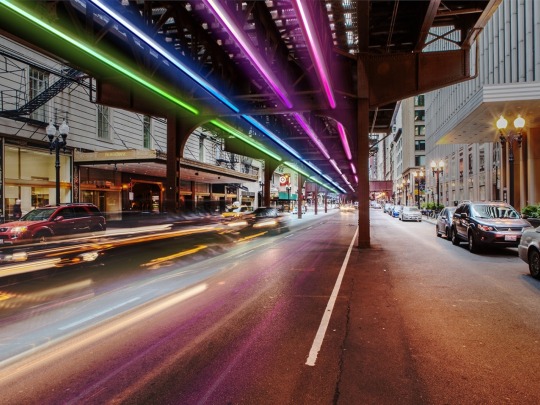 A Kickstarter project called The Wabash Lights has just reached its funding goal of $55,000 to implement what it is calling the beta version of its project.

The project is a site-specific and interactive LED light installation on the underside of the elevated train tracks that run along Wabash Avenue in Chicago.

The lights are completely customizable (color, patterns, pulses, and so on) and they will be controllable via web and mobile. So anyone walking down the street will be able to have some fun with the lights.

Here’s a video from the creators explaining more about the project:

It’s a clever idea and I can see the lights becoming just as recognizable as Chicago’s bean.

But the true success measure will be whether or not it draws people to the area and it changes the composition of the street. Elevated structures aren’t great for street life. That’s why I fought (unsuccessfully) to have the elevated Gardiner Expressway East removed here in Toronto.

It’s interesting to hear the one woman in the above video talking about how Wabash isn’t really a street you go to. It’s just the street between Michigan and State that you have to pass through. That’s how I feel about most parts of Lake Shore Blvd in Toronto.

Here’s how CityLab described it in their writeup about the project:

“While the L tracks are as iconic to Chicago as some of its skyscrapers, their presence overhead doesn’t necessarily bring in the foot traffic compared to other nearby streets.”

But something like The Wabash Lights could really make a difference.