I use it more than any other social network and any other app on my phone (according to my battery usage). In fact, I’m such a fan that I recently started buying shares. I don’t own a lot and the Canadian-US exchange is awful right now, but I do plan to continue buying (I like dollar cost averaging).

Twitter isn’t the darling of Wall Street like Facebook is. And I think the biggest weakness of Twitter is that it’s difficult for new users to really “get it.” Facebook solved this problem early on by recognizing that new users had to connect with X number of friends right away so that they received value immediately and the next time they visited.

But I digress. That’s not the focus of this post.

This morning a friend shared a Medium article with me that was written by the Laboratory for Social Machines at MIT. The article is about a small town in Spain called Jun (pronounced “hoon”) that has transitioned to using Twitter as the dominant platform for communication between government and citizens.

The initiative first launched in 2011 and since then the mayor, José Antonio Rodríguez Salas, has been trying to get every resident onto Twitter. All 3,500 residents are even encouraged to go into the town hall to have their Twitter accounts verified. This way government employees know for sure that they’re dealing with an actual resident of the town.

Here’s a simple example of what this means for government-citizen relations (the folks at MIT translated everything to English): 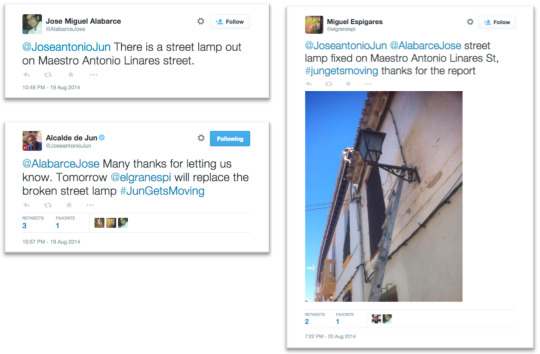 In the above example, a citizen tweeted the mayor informing him that a street lamp was out. The mayor then responded, tagged an electrician, and said it would be fixed the following day. Sure enough the electrician went and fixed it the following day, and then tweeted out a photo of the lamp.

Here in Toronto we have @311Toronto, which I have tweeted many times before with problems and they do respond quickly (far quicker than if you try and call them). But I still think there’s room for us to improve transparency and engagement across the board.

All of this is a perfect example of how technology and cities are colliding in a big way. In today’s world I really think you need to be able to think across disciplines.