For those of who were following Architect This City during the Gardiner Expressway East debate here in Toronto, you might remember that Darren Davis (transport planner with Auckland Transport) wrote a guest post called, Three minutes that rule the world – Will demolishing the Gardiner East actually make traffic worse?

It was an incredibly popular post at the time, so I’m thrilled that Darren volunteered to do another one on road tolls. This is a topic that I’m very interested in and have written about a few times. Road pricing, as you’ll see below, puts us in a bit of a chicken-and-egg situation. But sooner or later I think we will need to get our head around it, as will many other cities.

I hope you enjoy today’s post. Thanks again Darren.

A recent post on Architect This City, The Tragedy of the Commons, raised a fundamental but all too often forgotten point about transportation: That in networks where the price of use doesn’t change when demand changes, there is no effective mechanism to manage that demand.

Because there is no incentive to act in the public good, we often act in what we perceive to be our own personal interest, which is often the antithesis of the public interest. And remember that if we are driving, we are traffic. So often people will sit fuming in their cars in the midst of congestion with thoughts like in this cartoon. But of course with unpriced roads, there is no real price signal to these drivers to consider taking the bus. 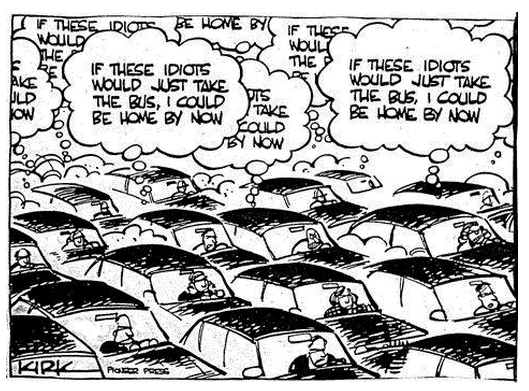 In a world where time is money, we are constantly berated about the economic costs of congestion. In 2011, the Toronto Board of Trade estimated that congestion in the Toronto region alone cost the regional economy $6 billion a year, rising to an estimated $15 billion in 2031 should no action be taken. More recent research by the CD Howe Institute pegs this figure at up to $11 billion.

Given these sorts of eye-watering figures, one might be tempted to think that car drivers, and in particular the goods industry, would be flinging their wallets open at the chance to buy their way out of congestion. And in fact Toronto has the 407 Express Toll Route which has elements of variable road pricing. However, while the 407 ETR carries around 350,000 vehicles per day, price increases have been matters of controversy. It provides some ability for those who can afford it to bypass Toronto’s notorious traffic congestion, but its fundamental weakness is that it’s just one road in one of North America’s largest city-regions.

Similar stand-alone efforts to address congestion in Metro Vancouver with tolled routes, such as the Port Mann Bridge on the Trans-Canada Highway and the Golden Ears Bridge, have fallen well short of their projected traffic volumes, while nearby untolled bridges such as the Patullo Bridge are heavily congested. We have a similar experience in New Zealand where our two tolls roads, with car tolls of $2 and $2.20 respectively, experience diversion rates of up to 30% to the alternative but substantially longer and slower free routes.

This brings up a fundamental paradox: Congestion costs the economy a fortune and congestion is a top-of-mind frustration, yet people seem reluctant to pay even comparatively small amounts to bypass congestion.

For example, the City of Toronto’s Roundtable on Gridlock & Traffic Congestion in February 2014 came up with the usual shopping list of “transportation systems management” responses – improved management of curbside space and construction projects; synchronized traffic signal phasing; better traveller information and improved incident response. While these are all worthwhile responses, they only improve system operation at the margins. Encouraging greater use of public transit was the very last recommendation and there was not a single mention of charging or pricing as a tool to address congestion. And the feverish activity continues with a hackathon called TrafficJam on October 2 – 4, 2015 with the goal of fixing Toronto’s traffic woes. 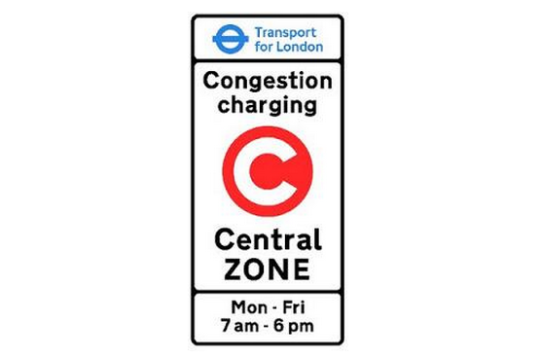 The very few cities that have actually had significant success at reducing traffic congestion – notably Singapore, London and Stockholm – have done this through cordon-based congestion pricing wherein if you pass the cordon, you pay the congestion charge. Entering central London on a weekday between 7am and 6pm will set you back a cool £11.50 ($C23.30). From 2003 to 2013, about £1.2 billion ($C2.42 billion) of congestion charge revenue has been invested in public transport, road and bridge improvements and walking and cycling, of which £960 million ($C1.94 billion) was for bus improvements. These measures have included significant road space reallocation to improve conditions for pedestrians, cyclists, public transit and the urban realm.

The latest Travel in London report states that “Over the 10-year period from 2003, total trips have increased by 11.4 per cent, with particularly notable increases of 52.3 per cent in rail trips and 32.0 per cent in Underground and DLR [Docklands Light Railway] trips, with cycle trips (as main mode) increasing by 53.9 per cent. Car driver trips decreased by 12.7 per cent over the same period” (my emphasis).

One interesting insight is that Stockholm trialed congestion charging and then reverted to business as usual of unpriced roads in advance of a referendum on congestion pricing. This gave Stockholmers a clear sense of the difference in traffic congestion and was crucial in supporting a yes vote in the referendum.

Stockholm has experienced a permanent reduction in traffic of about 20% across the toll cordon and congestion decreased by 30 – 50% – which demonstrates that traffic volume reductions have a disproportionately positive impact on congestion. About half of the “disappearing” drivers changed to transit, the rest to other alternatives such as different departure times and destinations and taking fewer trips.

For more on Stockholm, I suggest reading the Tools of Change case study on Stockholm Congestion Pricing. 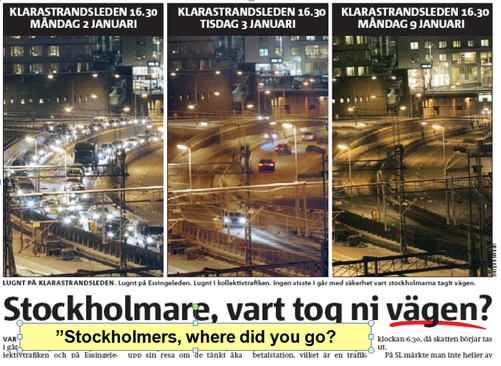 Before and after congestion charge photos of traffic levels in Stockholm

While this sounds very promising, congestion charging has significant equity implications and requires upfront investment to provide people who either choose to or can no longer afford to drive with transportation alternatives. Both Stockholm and London invested very heavily in public transit in advance of implementing congestion charging.

And this brings up a big issue for Toronto.

For congestion charging to have a meaningful impact on congestion without stifling economic activity or impeding people’s ability to move around, the core capacity of Toronto’s transit system would need to be addressed first. In particular the Yonge Line capacity enhancements, Metrolinx’s Regional Express Rail and most likely the Downtown Relief Line would need to be in place to provide both capacity and choice for people who either needed or wanted a travel alternative to any congestion charge.  This would mean that Metrolinx’s Big Move might need to get even bigger.