By now, I am sure that all of you know that the U.S. Supreme Court made a landmark ruling yesterday (Friday, June 25, 2015). In a 5-to-4 vote, it was decided that the U.S. Constitution guarantees the right to same-sex marriage. 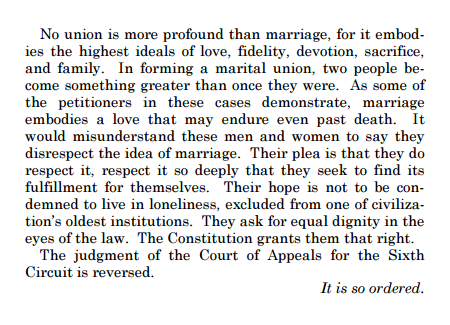 With this decision, the United States joins the Netherlands, Belgium, Spain, Canada, Norway, Sweden, and many other countries who already allow same-sex marriages nationwide. And I am delighted to see that happen with Canada’s neighbor.

I am also proud to say that it has already been a decade (2005) since Canada became the 4th country in the world – and the 1st country outside of Europe – to allow same-sex marriages. Not because it had a direct impact on my life, but because it is the right thing to do.

I believe that the strongest economies are the ones that can remain open and tolerant to new ideas and all kinds of people.

Cities like Toronto and New York (as I’ve argued before) became successful precisely because they opened themselves up to new ideas and new people (immigrants).

But many studies show that as people age, “openness” declines. We become less intellectually curious and our preference for variety wanes. Perhaps this is where the expression “set in your ways” comes from and why political orientation often correlates with age.

Thankfully the U.S. wasn’t so set in its ways that it couldn’t provide equal dignity to its citizens.