Yesterday I spent the evening walking Toronto’s new Queens Quay Boulevard, which fully reopened this past Friday after a number of years of construction.

It is part of Waterfront Toronto’s revitalization efforts and represents a solid decade in the making. West 8 of Rotterdam and DTAH of Toronto won the international design competition for the central waterfront back in 2006. And this past weekend a big component of that vision was unveiled.

But first, let’s take a look at what Queens Quay Boulevard used to be like. Here’s a Google Streetview image from 2009: 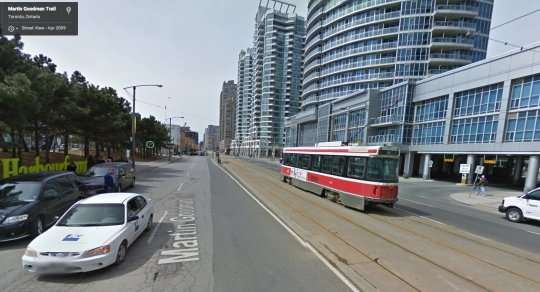 The streetcars ran in the middle of the street. Cars drove on the north and south side on both sides of the tracks. And the sidewalks were fairly small and usually at capacity during the busy summer months. It wasn’t a great street.

Now here’s a photo that I took yesterday from that same vantage point (2015): 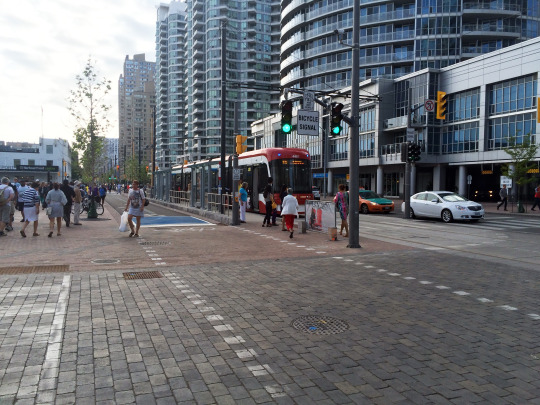 The street has been completely reorganized. On the north side of the streetcar tracks is where the cars now drive in both directions. On the south side of the tracks the lanes of traffic have been replaced with a 2-way bike trail (part of the Martin Goodman Trail). And on both sides the pedestrian areas have been greatly expanded. It’s now a magnificent street.

If you haven’t yet been down to the new Queens Quay, I would encourage you to check it out on either foot or bicycle. (If you go on bicycle, let me know and I’ll join you.)

Toronto may have taken a giant step backwards with its recent decision on the Gardiner East, but we also took a giant step forward with the reopening of Queens Quay Boulevard.