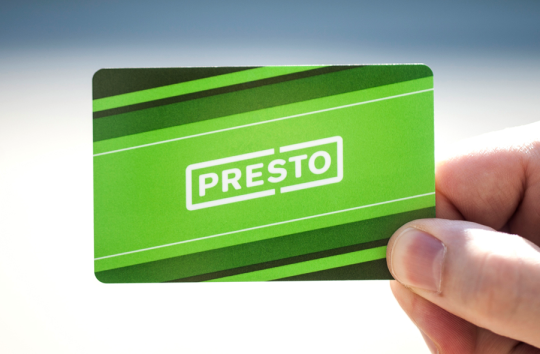 Back in 2004, I spent a summer living in Asia. And one of the things that I remember really standing out for me was Hong Kong’s Octopus card. It’s a refillable card that you just tap to get onto transit. Lots of cities have them.

But the cool thing about the Octopus card was that you could use it so many other places besides just on transit. I don’t know know what it’s like today in Hong Kong, but I remember also using it in taxis and to buy breakfast in the morning at Pret a Manger. That was pretty incredible for 2003.

This was also great for me because I’m one of those people that dislikes carrying around paper money/change. I almost never spend my change and so it just ends up just accumulating in a container beside my front door. Here in Toronto we also use microscopic transit tokens, so that adds another layer of inconvenience.

But that’s all changing.

Toronto now has its own version of the Octopus card and it’s called PRESTO. Technically it launched in 2009, but I only recently noticed the card readers appear at my home subway station (King Station). So tonight I decided to finally pull the trigger and order a card. I’ve been waiting 11 years for this moment 🙂

And I was doing that, I noticed this message on the website:

Not surprisingly, we seem to be pushing to get PRESTO rolled out before the world comes to visit. And I think that’s a great thing.

One of the big benefits of hosting an event like the Pan Am Games or the Olympics is that it creates a hard deadline to get things done, which is something governments often need. It’s a bit like tidying up before guests come over for dinner. You find a way to do it before people arrive.

There’s a lot of debate about whether or not it makes sense for cities to spend the money on playing host city. But I don’t think we should ignore the fact that they can be a great catalyst for city building. Things get done. And oftentimes done is better than perfect.

Good news: I’ve been told that the PRESTO system will be compatible with mobile phones and near field communication. Because let’s face it, cards won’t be around that much longer.