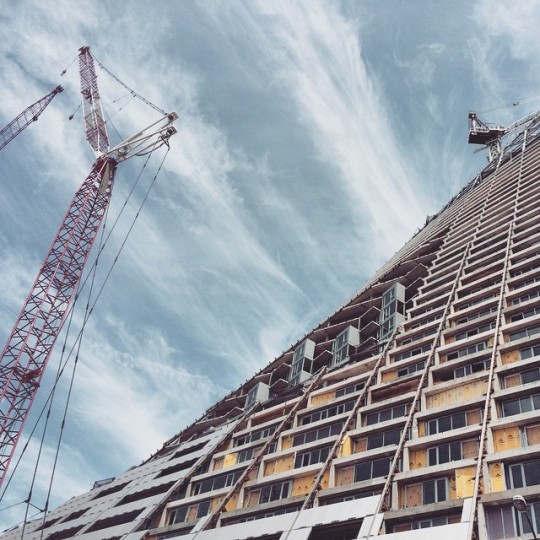 We’ve been talking about a lot of heavy topics here on Architect This City lately. Everything from the contentious Gardiner Expressway East to minimum population densities to density creep.

So today I thought we could talk about something a bit more fun: architecture.

When I was in New York last weekend, one of the buildings that was on my must-see list was the now under construction West 57th Street by Danish architect Bjarke Ingels. See photo above. (It also happens to be at the exact location where the West Side Highway transitions from elevated to surface boulevard.)

This is supposedly the first North American project for Bjarke Ingels (he also has a project in Vancouver now). And if you’re a regular reader of this blog, you’ll know that I’m a fan of his work. His diagrams and storytelling ability were a big inspiration for me when I was in architecture school.

The concept behind the project was to create a new hybrid building typology, one that is a cross between the typical European perimeter block building and the North American skyscraper. And the result is pretty wild.

Here’s a video in case you aren’t familiar with the project. Click here if you can’t see it below.

I think it’s a really exciting project. What are your thoughts?