Blitz by Tristan O’Tierney on 500px

Back in 2011, the The Pembina Institute published a report called, Building transit where we need it. And in it they quite clearly outlined the population densities that are needed to make various types of transit investment cost effective.

And the reason for this is because there’s a strong correlation between population density (i.e. land use) and transit ridership. The two go hand in hand and should not be decoupled. If population densities are too low (as they are, for example, along the Sheppard subway line here in Toronto), people don’t take transit. They drive.

Here’s a chart from the report showing the current and projected population densities for Toronto’s existing and proposed routes (keep in mind this is from 2011). 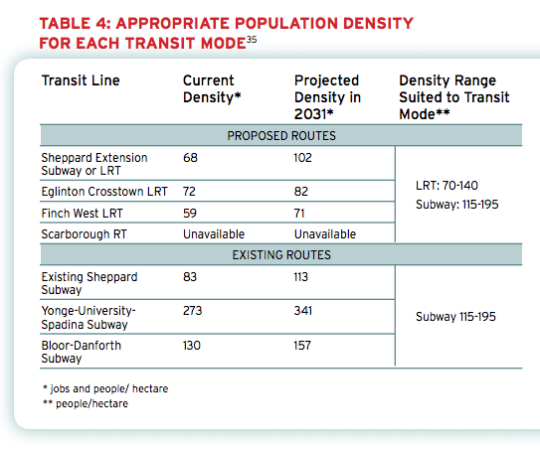 So what does this chart tell us?

Unfortunately, transit decisions are often made based on politics instead of data. And that results in subways in places that don’t make a lot of sense. That’s unfortunate because it means less riders, less revenue, and more subsidies.

The other challenge with running subways through low density neighborhoods is that it then creates tension when the city and developers go to intensify those neighborhoods through transit-oriented development. (See #DensityCreep.)

But if we’re going to be fiscally irresponsible about where we deploy our transit capital, the least we could do is upzone the surrounding areas and impose minimum population densities.

In fact, here’s what I think we should do: Land use should be bundled with the transit decision.

I wonder if we framed the question in this way if it would change where subway lines get approved. What do you think?