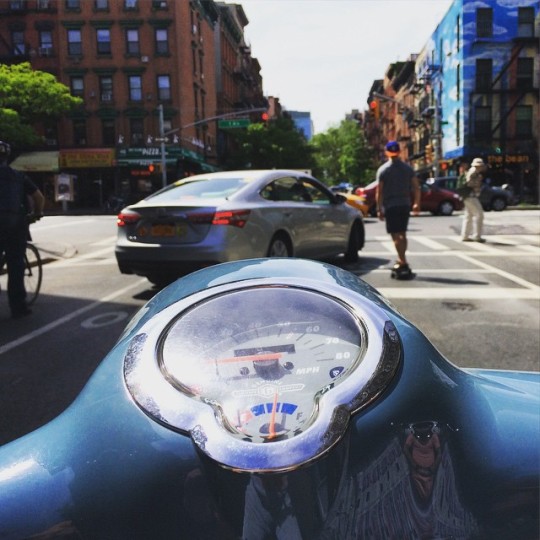 I am writing this post on a Porter flight from New York back to Toronto.

For my last day in New York, my close friend and I rented scooters and rode all around Manhattan and Brooklyn. It was a great way to cover a lot of ground, but also a great way to still absorb the city. It’s harder to do the latter in a car and I never have any desire to drive in New York.

Because the great thing about New York is that as a pedestrian you feel like you control the streets. When you’re waiting at a crosswalk, you’re never actually waiting. You walk off the sidewalk and onto the street so that you can assert yourself in front of the cars and wait for an opening. This serves to narrow the portion of road that the cars can actually drive on and reminds the drivers who is boss.

At the same time, there are many instances throughout the city where New York has purposefully reallocated the space dedicated to pedestrians (and cyclists) and the space dedicated to cars. They’ve created new public spaces, widened the areas where people can walk, and seemingly blanketed the city with bike lanes. And that makes a lot of sense given that in many (most?) areas of the city, pedestrians greatly outnumber cars.

So does that mean New York is at war with the car? (I’d be curious to know – in the comment section below – if those kinds of discussions take place in the city.)

I suppose you could spin it that way. But New York also does things for cars. While riding around on the scooter today, I was so impressed by how well timed the streetlights were along the avenues. It made it incredibly easy to go downtown or uptown. In Toronto, I often feel like we time our lights to make driving as slow as possible.

But make no mistake; New York is not a driving city.

New York is about walking, biking, taking transit, and hailing cabs. There is a reason they have the highest transit ridership in the US. The city is built for it. And unless driverless cars and ride sharing completely changes the equation, I will continue to believe that transit is the most efficient backbone for any big city.