This morning I stumbled upon the following chart (via The Atlantic) summarizing the locations of the 100 tallest skyscrapers in the world. 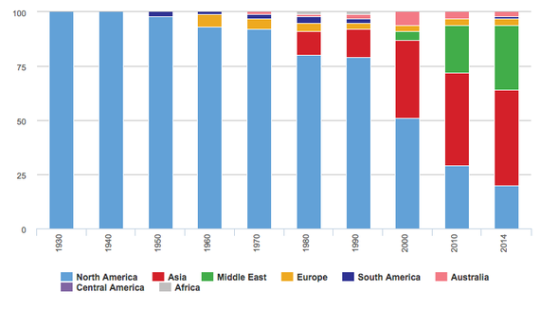 As you can see North America dominated tall buildings for most of the 20th century. But then in the 1980s, Asia starting building. Then in the 2000s, the Middle East started building. And today, Asia and the Middle East are where the world’s “supertalls” sit.

What’s fascinating about this shift is that in many cases, there’s absolutely no physical or economic need to developing so tall. Yes, rising land values can drive up the height of a building, but not to the extent that we’ve been seeing.

Instead, building “the tallest building in the world” is more symbolic than anything else. It’s about ego. It’s about asserting your position on the global stage. And so while this is a chart about tall buildings, it’s actually a pretty telling chart about global ambitions.