I’ve been following and checking out Kickstarter pretty much since the beginning. But it wasn’t until last night that I backed my first project.

After doing that, I immediately started thinking about urban projects that might be able to also get crowdfunded using Kickstarter. How could it be used for city building? A Kickstarter project, after all, just has to be something with a defined scope and a clear end goal.

Not surprisingly, this has already been happening for many years now.

A great example is +Pool in New York, which is an initiative to build a publicly accessible floating pool that also filters river water. The project launched in June 2011 and by July 2011 they had raised $41,648 USD to build and test different filtration techniques. 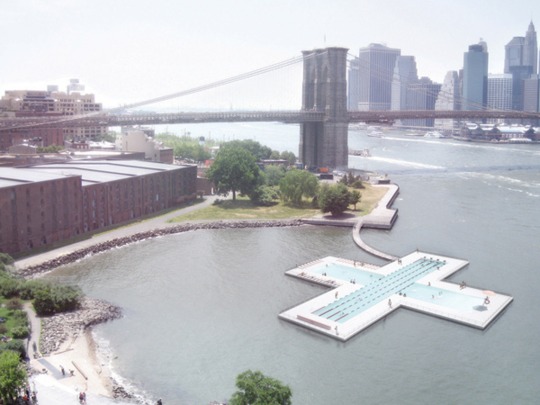 Today, the project is still moving ahead and they are now offering up the opportunity to buy and have your name engraved on tiles within the pool. If I lived in New York, I would be all over this.

But what’s powerful here is the ability for crowd-based platforms (like Kickstarter) to both get radical new ideas off the ground and to empower local communities to affect change. Here’s a quote from PSFK:

It’s very difficult to get funding for these ‘out there’ ideas that regular systems might not support. Creators have to take risks and be imaginative, as well as put their ideas out there and let the public decide. There are no traditional guidelines on crowd-sourced platforms—they’re much more meritocratic. You can think in big scope and that changes what gets made and who can access it. Anybody with a couple of doubles can voice what they want to be built, and in that way we see the entire community having a huge say in the design world.

And when I see projects and platforms like this, I can’t help but wonder if (when) city building is going to become even more decentralized.

Last night I was also at an event – being put on by Ryerson University’s City Building Institute – called Bridging Divides: What Can Cities Do? And one of the suggestions that came up was that Toronto needs more local and granular community councils (there are currently 4) in order to bridge some of the divides that are happening in our city.

But in a world where it’s possible for each and every person in a city to not only have a say but to quickly say it from their smartphones, why can’t we go even more local? Instead of 4, 10, or 90 community councils, why can’t we have everyone more engaged?

I think we’re headed in that direction.