By accident, this week on Architect This City seems to be turning into Elon Musk week.

Yesterday, Musk announced something called the Powerwall home battery. Measuring about 3′ x 4′, the shield looking battery pack will charge using the electricity generated from solar panels (or from the grid when rates are at their lowest) and then power your home.

It’s designed for consumers and will cost between US$3,000 – $3,500 depending on capacity. The individual Powerwalls can also be daisy chained to increase capacity. It will be available starting this summer.

A wall battery may not seem all that interesting to some, but I think this is actually a big deal for a few reasons.

Renewable energy is often both intermittent and produced when you don’t need it. Here’s a great chart from Tesla that shows what I mean: 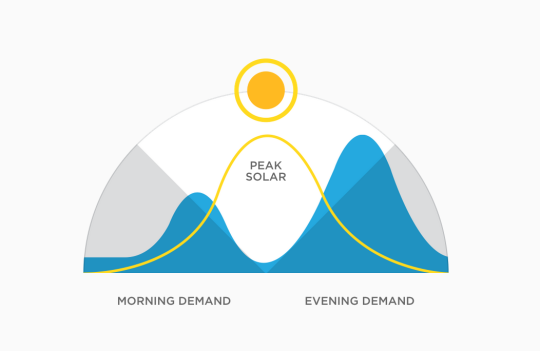 During peak solar hours, most people aren’t home and most people aren’t consuming at peak levels. That’s why it’s important to be able to store the energy that you collect, whether it be from solar, wind or other renewal energy source. And from what I hear from my friends in the industry, storage has been a bit of an Achilles heel for adoption.

It will also help to further decentralize energy production. What is produced locally (from say solar panels) will be stored locally for when it’s needed locally. This is in contrast to centralized production or producing energy locally and then feeding any excess capacity into the grid for use somewhere else. That requires transmission and will be by definition less efficient.

All of this makes me excited about Powerwall.

If any of you are an expert in this industry (which I am not) or you just have additional thoughts, I would love to hear from you in the comment section below.