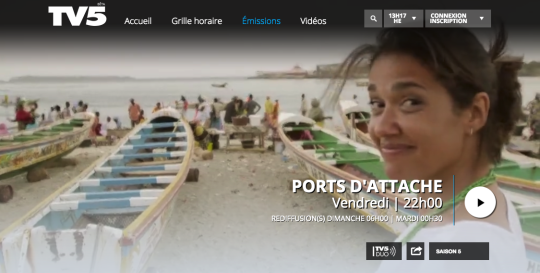 This morning I was interviewed for a Montreal-produced TV show called Ports D’Attache. The English version of the show is called “Waterfront Cities of the World” and it airs on Discovery.

Here’s a list of all the cities they’ve visited in the first 4 seasons and here are all the shows from the first 2 seasons in English (which you can watch online for free).

Rather than a travel show, it’s a look at the “spirit and soul” of each waterfront city through the lens of “local personalities.” There’s definitely a lot of fodder for city geeks and so I thought you all might find the series interesting.

Toronto was the last stop of season 5. The other cities from this season include Philadelphia, Budapest, Rome, Taipei and Kuala Lumpur, to name only a few of them.

I’m glad that they decided to come to Toronto and I’m delighted that they invited me to be on the show. The team was great and, if you haven’t already noticed, I love supporting this city.

The show will first be released in French (with my comments dubbed over), but an English version will follow. Once that version is released, I’ll circulate a link.