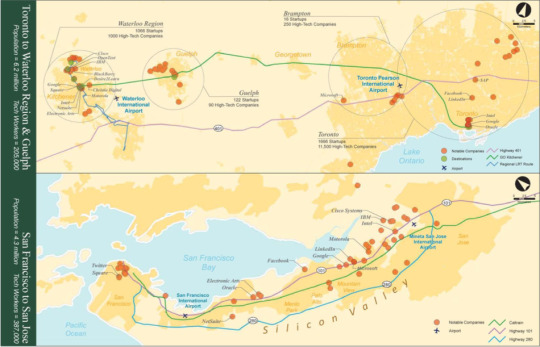 This morning I stumbled upon an interesting Medium article talking about the need for an all-day two-way urban rail service between Toronto and Waterloo.

The argument is that along this corridor sits a technology ecosystem that is second in size only to San Francisco-Silicon Valley and that current connectivity levels represent a missed opportunity of epic proportions. Presently this rail service will feed you into Toronto during the morning rush hour and take you back out in the evening rush hour. But that’s it.

According to this report prepared by the City of Kitchener (which is beside Waterloo), efficient train service would stitch together an ecosystem of approximately 12,800 technology companies, 2,800 startups, and 205,000 technology employees. It would also connect 6 universities and 4 colleges, many of which are ranked top in the world.

There’s an argument here that this is exactly the sort of thing that governments should be doing to encourage innovation and entrepreneurship. Rather than trying to be heavily involved in actual startups, they should be creating an environment that maximizes output and then getting out of the way.

I think this makes a lot of sense. Don’t you?