Last month it was announced that Amazon will be taking 127,000 square feet across 5 floors in a new office tower in Toronto’s emerging South Core neighborhood. The space will be used for about 800 employees and they’re expected to take occupancy this fall.

At the same time, I learned that Amazon will be joining Apple (positioned 6 floors below them in the same tower) and Cisco in South Core.

On top of all this, a friend of mine then tweeted out a list of major tenant re-locations here in the city. The data is from CBRE and the timeframe is from 2009 to 2014 (Q1).

The first thing I noticed when I looked at the data is that there’s a clear trend towards downtown. Perhaps that was the point of the study, but it’s still interesting nonetheless.

From Google and Deloitte to eBay and Aol, every single tenant in the CBRE list is or will be moving downtown (or to the shoulders of downtown). 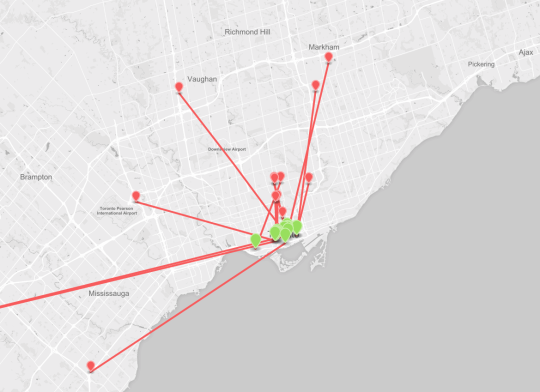 And here’s what it looks like zoomed in closer: 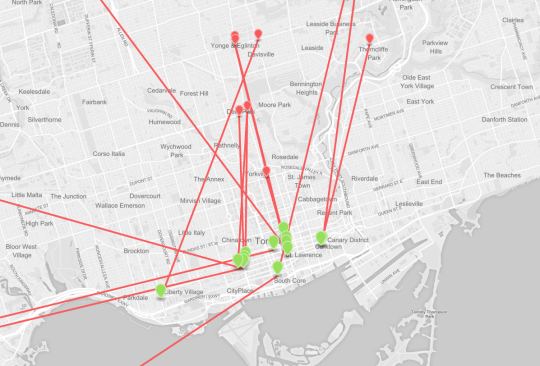 This, of course, is a trend that has been happening for years. But I still think it’s worthwhile repeating how clearcut it seems to be.

Companies know that their greatest asset is human capital. And they have quickly realized that a lot of young smart people want to live and work in dense walkable communities. They’re simply moving to where people already want to be.

So here’s a question for the Architect This City community: On a scale of 1 to 10, how important is a company’s location when determining whether or not you’d like to work for them? Let’s talk about it in comment section below.