Low interest rates are a big part of this story. But there’s also a supply story at play here. The low-rise housing market in this city is heavily supply constrained and so we have an environment where people with more money simply outbid those with less money.

The high-rise side of the market, on the other hand, is creating lots of new supply. And in my opinion that’s why its price growth has been more moderate in recent years and why the pricing spread between low-rise and high-rise housing continues to widen.

Assuming these trends continue, one of the things I’ve thought about and written about in the past is whether we’ll eventually seeing a point where high-rise housing actually becomes a more affordable option for families. Because right now, if you’re in the market for a 3 bedroom home, a low-rise house is likely your most affordable option.

Here’s a quick comparison that I did up this morning between a detached house and a high-rise condo: 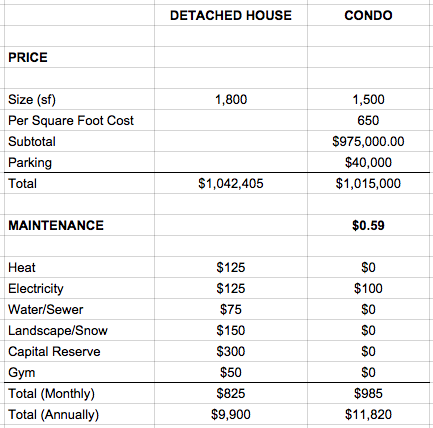 For the condo, I assumed a 1,500 square foot 3 bedroom home. I priced it at $650 per square foot (which would be above average for the city) and then added $40,000 for a parking spot. Here you have a slightly smaller condo, but it’s also priced slightly less.

I then compared operating/maintenance costs. For the condo, I assumed a maintenance fee of $0.59 per square foot (which I think is reasonable) and then added $100 per month for electricity. Typically electricity is billed outside of maintenance fees.

For the detached house, I tried to create a similar living situation. I assumed that the owner wouldn’t be cutting their own grass or shovelling their own snow. I assumed that money would be put away each month as a capital reserve for future house expenses (similar to the reserve fund in a condo). And I assumed a gym membership since most condos have a gym. I ignored property taxes and insurance.

The detached house still works out to be a less expensive to operate in this scenario, but not by much. Overall, the two appear quite comparable. Which is why I wouldn’t be surprised if we see a tipping point in the future where all of a sudden families start finally adopting the mythical 3 bedroom condo.

I have published my spreadsheet to the web in case you disagree with my assumptions and want to create your own.