One of the things I noticed this past weekend when I was on my Porter Escape in Quebec City was that there’s still evidence of the seigneurial land use system. I saw it on île d’Orléans.

Established in 1627 in New France, the seigneurial system was a feudal way of distributing land and creating subsistence farming for those who occupied it. It was ultimately abolished in 1854, but you can still see vestiges of it.

With the seigneurial system, a typical farming lot was a long and narrow strip of land emanating from the water, which in this particular case was the St. Lawrence River. Here’s a map from 1641 showing what that looks like: 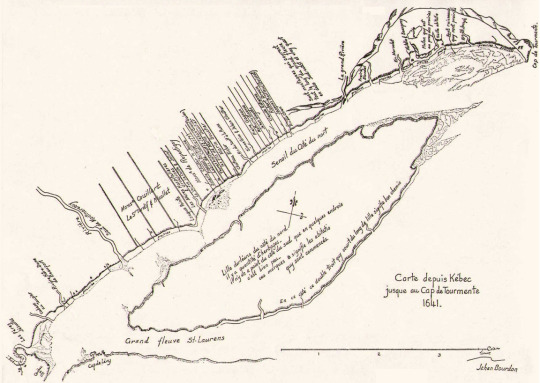 The reasoning behind this spatial arrangement was rather simple. By having long narrow lots, it meant that you could maximize the number of farmers who had direct access to water. This was needed for navigation, but also for many other obvious reasons. This was an efficient layout.

At the same time, the long strips meant that each farmer had access to a broad cross section of different kinds of land. They had fertile land for growing, land for their home, and frequently land with trees so that they had material to build, fuel to burn, and so on. It also meant that, despite the overall lot sizes, people actually lived fairly close to each other. It created communities.

Of course, there’s a lot more to the seigneurial system than just its physical form and there are reasons it was eventually abolished. But today I just want to focus on spatial layout. Because I think there are parallels to how we continue to plan our communities.

If you live in a city you’ve probably come across a narrow rowhouse, a narrow townhouse, and/or a long and narrow condominium – which many people like to pejoratively refer to as a “bowling alley” plan. In these cases, the width of the home could be somewhere between 10 and 13 feet.

In tight urban conditions, it’s not uncommon to have no “side yard windows.” In my case, I live in a condominium with 20′ feet of windows on one side only. The other 3 sides of my box have none. And that’s a fairly common urban condition.

I find this interesting because as much as the world is rapidly changing, some things don’t actually change all that much.